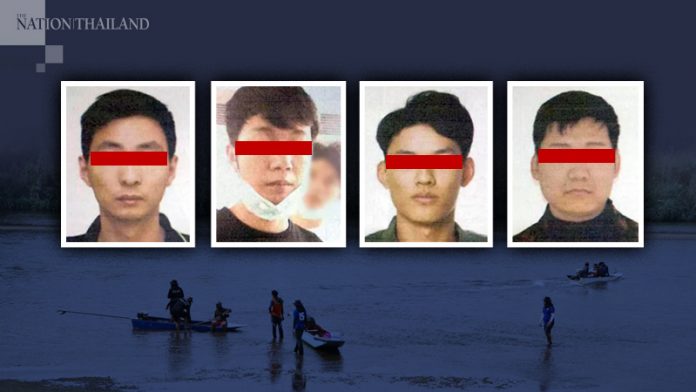 Four Chinese nationals have been arrested this afternoon in Thailand by Kamphaeng Phet police in connection with the murder of a thirty year old Chinese man who was found bound by his arms and feet and stuffed in a suitcase that was thrown in the Ping River in Northern Thailand earlier this month.

“The body of Wang Jun, aged 30, was found doubled over in a black suitcase floating in Ping River on Tuesday this week with the ankles tied with plastic cables.” Pol General Krisana Pattanacharoen, deputy spokesman of the Royal Thai Police, said. “Police divers are still searching for Zhu Bing, 28, his wife, who has been missing and they believe might have been murdered in the same fashion.”

Jun arrived on February 12 with a group of Chinese nationals who visited Pattaya and left the country on February 14 while he stayed on. The group of fourteen other Chinese Nationals were not a tour group and according to Chonburi police their activities were described as suspicious and not typical for tourists, renting three villas in Chonburi and primarily being confined to the villas for the entire stay. The four men arrested were not part of the additional group. Jun was also a frequent visitor to the Northern border of Thailand, although the purpose of his trips was not clear nor the purpose of his business.

“Officials from Kamphaeng Phet Station have tracked down four suspects connected to the murder, all Chinese nationals,” added Krisana. “Preliminarily, they have been charged with three offences: first-degree murder, kidnapping and detaining others against their will and resulting in death, and moving or destroying a dead body with an intention to cover the cause of death. These offences carry a prison sentence of 20 years, with maximum punishment being execution.”

Police continue the investigation and will release further details in the near future, he added.