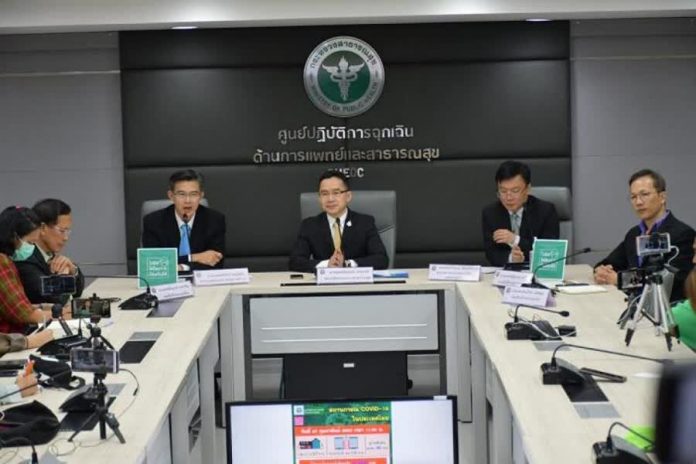 BANGKOK(NNT) – The Ministry of Public Health yesterday announced very good news as three more confirmed COVID-19 patients in Thailand, two of whom are Chinese nationals, have now recovered from the disease after successful treatment.

The Ministry of Public Health’s (MOPH) Spokesman Taweesin Visanuyothin, revealed that after the official announcement of the 38th-40th confirmed patients yesterday, an elderly couple who travelled back from Hokkaido, Japan, plus their niece, the Department of Disease Control’s (DDC) 1422 hotline has received some 1,300 calls from the general public making inquiries.

The DDC has now made a list of frequently asked questions and answers for the benefit of the general public. Meanwhile all unnecessary travel to countries with an active outbreak of the virus should be postponed or cancelled. Those who decide to travel should protect themselves by eating well cooked food, using serving spoons, and washing their hands frequently. Anyone feeling ill while traveling should report to the embassy, and request a special medical check-up upon arrival.

The MOPH spokesman said that the symptoms of COVID-19 are generally mild in most people, and persons who think they have contracted this virus should see a doctor immediately without being concerned about medical bills. More information regarding the disease is available on the MOPH’s website, and the DDC’s automated chatbox, in addition to the 1422 hotline.

The DDC’s Director of Communicable Diseases Department Sopon Iamsirithawon, said that the condition of all three newly confirmed patients is not critical, while all 101 persons in recent contact with the patients have been contacted by the officials. Test results have returned negative for 97 persons, with four results pending. Those in immediate contact with these patients are family members, tour group members, medical staff, and classmates.

The DDC communicable diseases chief has confirmed the spread of COVID-19 in Thailand is still confined to a very limited group.

No patients have died in Thailand and over two thirds of the patients diagnosed have been treated and fully recovered and released.