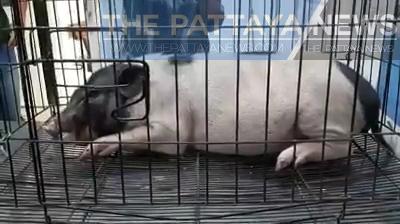 A Veterinarian at Nerb Plubwarn Animal Hospital Jorraree Uttasarn said “A local resident brought the two month old pig to us after the animal was found to be sick.”

“The pig died one hour later. It has tested positive for rabies.” she explained.

“The local resident told us that the pig lived with several pet dogs. They will also be tested and inspected.” She added.

Veterinarians at Nerb Plubwarn Animal Hospital Phadet Siridamrong told The Pattaya News “Rabies has been found in some areas in Bang Lamung which are Huay Yai, Takean Tai, Nong Plalai and Pong. If bitten by a strange animal we recommend to immediately go to a hospital for assistance.”