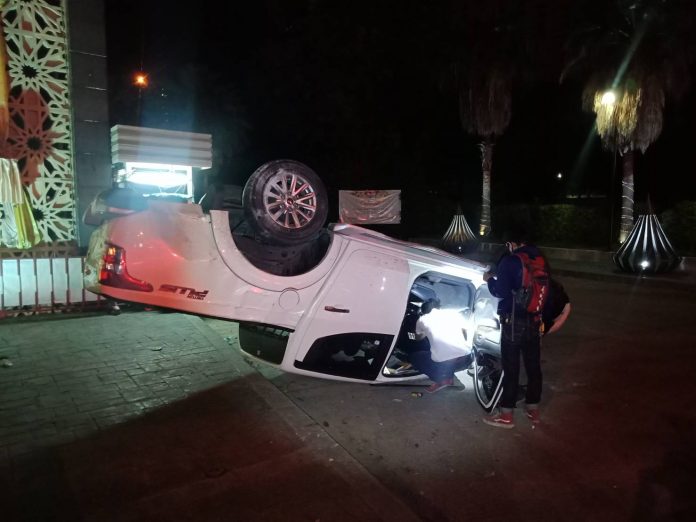 Pattaya –
A motorbike driver has sustained serious injuries after a pickup truck flipped and crashed into a motorbike in Pattaya. The pickup truck driver blamed a wet road.

Captain Nakarat Nonsrilard of The Pattaya City Police was notified of the incident at 6:00AM on Jomtien Second Road near View Talay 5.

Police, emergency responders and The Pattaya News rushed to the scene to find the flipped pickup truck on the road.

The truck driver, a 44 year old Thai man named Rueangchai Suwannamit who miracously had not sustained any injuries was waiting for Pattaya police at the scene.

Nearby, police found a heavily damaged motorbike. The driver, 39 year old Mr. Puchong Sritharam had sustained serious injuries. He was rushed to a local hospital.

The pickup driver said there was some water on the road which caused him to lose control of his vehicle before crashing into the motorbike driver and flipping his truck.

Pattaya police are continuing their investigation and reviewing CCTV in front of the nearby condominiums.