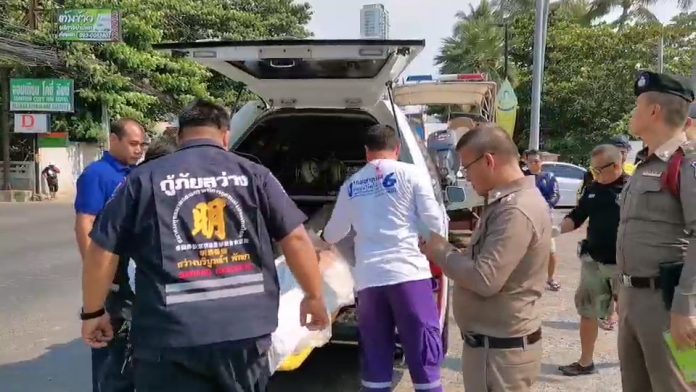 Pattaya –
An unidentified heavyset foreign man was found floating in Pattaya Bay this afternoon with an 8 kilogram rock tied to his neck.

Lieutenant Colonel Attarot Krongrat of the Pattaya City Police was notified of the incident at 1:00PM this afternoon.

Police, rescue divers and The Pattaya News rushed into the sea near off Koh Larn Beach in Pattaya Bay.

The body was found floating 400 meters from the shore. It is a heavyset male foreigner estimated around 55 years old.

He was wearing a gray vest and Jean shorts. His neck was tied in a noose with a large rock weighing about eight kilograms.

No signs of struggle was found on his body according to Pattaya Police. It is believed that he died at least one to two days before his body was found.

Pattaya police are working on identifying the body and the cause of death.