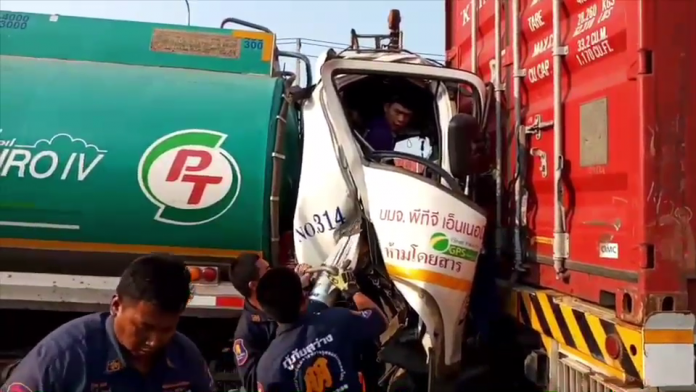 An alleged brake failure led to an oil tanker truck crashing into the back of an eighteen wheeler on Motorway 7 outbound near Laem Chabang yesterday afternoon in the Chonburi area.

The driver of the oil tanker truck, who was not identified to the media, was slightly injured in the accident but due to the crash compressing the vehicle was unable to escape without assistance. Rescue workers from Sri Racha brought specialized rescue equipment to help release the driver from the cabin. It took nearly an hour in total to get the driver free.

The driver told Highway Police that the eighteen wheeler had stopped suddenly and he was unable to respond in time as his own brakes allegedly failed.

The driver of the eighteen wheeler was not injured. The oil truck driver was taken to a hospital for his injuries and released.