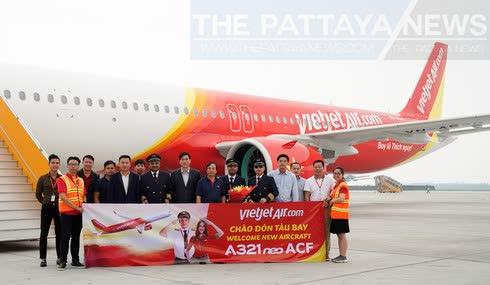 Flight VZ970 made its debut on December 23 after departing from U-tapao International Airport. Passengers onboard had the opportunity to enjoy a number of exciting performances on the flight and received several gifts courtesy of Vietjet Air.

As a way of welcoming the latest route, the airline has offered a series of promotional tickets to customers priced from zero VND, excluding taxes and fees, over nine days between December 23 to December 31.

Promotional tickets are only applicable to new routes between Ho Chi Minh City and Pattaya which take place between December 24 and March 31, 2020, except for periods such as holidays and the New Year.

This promotion is on offer to those who purchase tickets via Vietjet Air’s offical website, the mobile application, and the “Booking” section on Facebook.

Following the opening of the new route, Vietjet Air bolsters their position as one of the largest operators between Vietnam and Thailand with a total of eight routes, including to Bangkok from Hanoi, Ho Chi Minh City, Da Nang, Hai Phong, and Da Lat, to Phuket and Chiang Mai from Ho Chi Minh City, in addition to the latest route between Ho Chi Minh City and Pattaya.

The latest air service to Pattaya is expected to greatly contribute to increasing the number of tourists that travel between Vietnam’s southern provinces and the Rayong and Pattaya region, in addition to facilitating the international visitors’ travel through both Tan Son Nhat International Airport and U-Tapao International Airport.