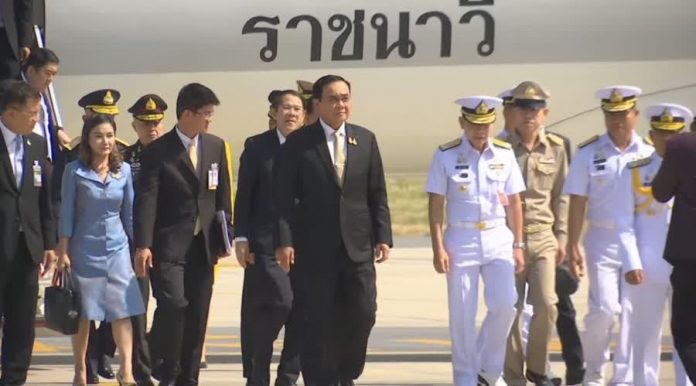 RAYONG (NNT) – The Prime Minister and Defense Minister, Gen. Prayut Chan-o-cha, has presided over the opening of the second passenger terminal at U-Tapao Rayong-Pattaya International Airport. The new terminal can handle 3 to 5 million passengers a year.

The Prime Minister said the opening of the terminal is another step for U-Tapao Rayong-Pattaya International Airport towards becoming a fully functional commercial airport. It will help stimulate the domestic economy and serve as a gateway to the Eastern Economic Corridor (EEC) and other regions. With the new terminal, the airport will be capable of accommodating more travelers, creating more jobs for the locals and boosting investor confidence.

The Prime Minister then visited an exhibition and facilities inside the new passenger terminal. He was accompanied by the Commander-in-Chief of the Royal Thai Navy, Adm. Luechai Ruddit.

U-Tapao Rayong-Pattaya International Airport began commercial operations in 1989. The airport currently handles more than two million passengers annually, with about 15,000 flights per year. The second terminal was built due to the increasing number of travelers and commercial flights. The airport will help support the EEC, as it connects with Suvarnabhumi and Don Mueang airports.

The new passenger terminal will help U-Tapao Rayong-Pattaya International Airport become the eastern aviation hub of Thailand. Following its testing and pre-opening stages, the terminal is now fully ready to serve travelers. U-Tapao Rayong-Pattaya International Airport is the country’s third fully functional commercial airport. It can handle up to 1,500 passengers per hour.