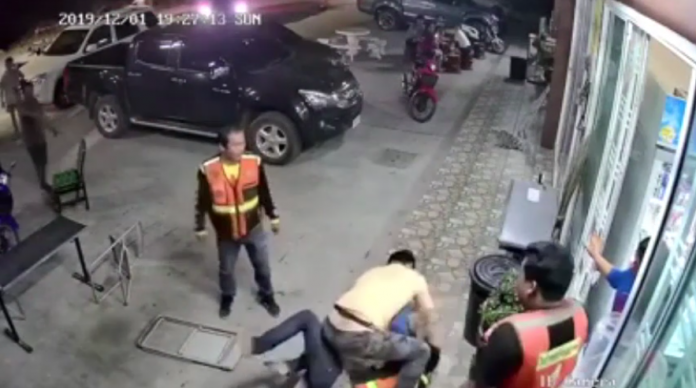 The Video above shows the brawl caught on CCTV.

The CCTV footage in front of a shop in Chonburi revealed the incident on the first of December at 7:26PM.

Motorbike taxi drivers and Grab drivers were fighting in the chaos. The incident was originally reported by 77kaoded earlier this afternoon. They stated details on the incident were low and both sides accused the other of starting the fight.

One driver interviewed, who didn’t want to be named, claims he has been a motorcycle driver in the local area for a decade and has worked much longer than the Grab drivers and the Grab drivers are interfering on their space and area. He also stated that Grab remains against the law (although efforts are taking place to fully legalize it) and that the attacks and recent strikes show that they should be banned.

In recent weeks Grab drivers have struck twice in the local area asking for more pay and benefits. Just last week The Pattaya News reported on another massive brawl between a dozen Grab and taxi drivers in Pattaya.

This also comes following an incident earlier today in which a tourist claims she was attacked by a motorcycle taxi man for hiring a Grab driver in front of him in Bangkok. Police are still investigating that incident, which was first reported by Khaosod News.