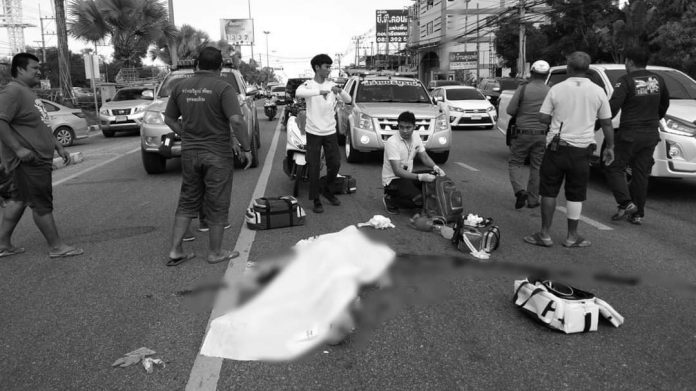 A British motorbike driver died after colliding with a sedan in Pattaya this morning.

Captain Weerayut Kangkala of the Pattaya City Police was notified of the incident at 11:00 AM at a U-turn in front of a Makro store on Sukhumwit Road.

Police and Sawang Boriboon rescue workers rushed to the scene. At the scene they found the body of a man who was later identified as a 74 year old British Tourist. His name was withheld pending family and embassy contact.

His remains were taken to a local hospital. The damaged motorbike was found nearby.

Nearby the police found a damaged sedan whose driver is 34 year old Sornchai Petjamras.

The sedan driver told police that the motorbike had immediately changed the lane to make a U-turn in front of the sedan. He was unable to avoid the collision.

However, Pattaya Police are continuing their investigation for further legal action.