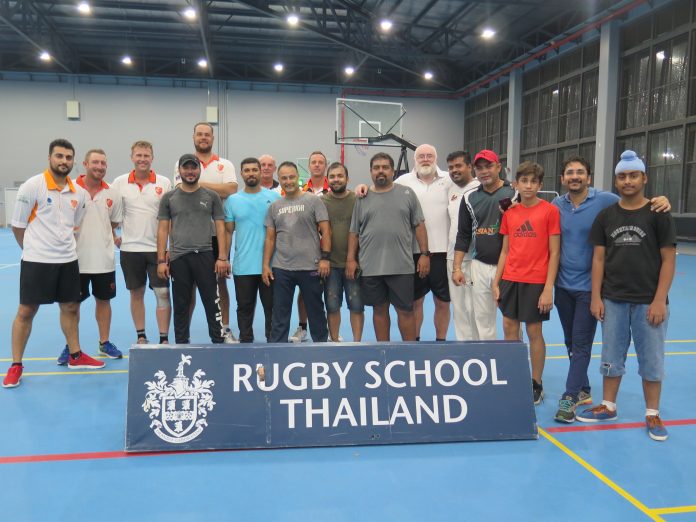 Round 9 reverted to the usual Monday evening fixtures at Rugby School Thailand (RST), Banglamung.  This week’s matches were between RST Cobras versus RST Vipers and Pattaya Cricket Club (PCC) versus Asian All Stars (AAS).

At the end of last weeks matches RST Vipers were unbeaten with 3 wins, RST Cobras, ASS and PCC all had one win each.

The Cobras opened the batting with Pete Reeh and Guthrie Miller who made a good start by adding 29 for 1 as Guthrie was LBW to Ryan Driver.  Charlie Rowe and Will Howell arrived where upon Charlie threw the batt about and ran his usual frenetic style of running and scored 15 off three hits but was run out by the bowler, Chris Pohl. Will Howell was run out in the next over by the bowler, Ryan Driver.  Stuart Douglas was taken for 17 in the 6th over giving the pair 28 runs for 2 wickets and the Cobras were 58 for 3 at halfway.  Will Howell stayed at the crease to make the 8 batsmen and was joined by John Holland.  Nick Hitchmough’s bowling was taken to task although Will H was run out again (this time by a different bowler, Nick H), the pair added 35 for 1 and the Cobras were doing well at 90 for 4.  Lewis Madd and Chris Lindop took the last 3 overs and were kept under control, especially in the last over by Ryan Driver as Lewis M was LBW – a wicket maiden. The first of the competition.   Cobras finished with 101 for 5 and a difficult target to reach. The Cobras are generally good at preserving their wickets but they lost 5 – all to run outs by the bowler and LBW’s!!

The Vipers were next and equally good at preserving their wickets, and winning, but it was not to be.

Dan Allan and Chris Sizer opened and they put on 25 plus 4 extras but they lost 3 wickets to catches by Lewis Madd (2) and Guthrie Miller.  Chris Sizer was a bit unlucky to be given out as the ball probably did snick his leg and not his bat. Nick Hitchmough and Burger Marx were next up.  They were very well contained by John Holland, Charlie Rowe and Chris Lindop and only managed 13 for 1. 38 for 4 and 20 runs behind at halfway was not the start the Vipers were seeking.  Nick H stayed at the crease as the eighth man and was joined by Stuart Douglas. Things went from bad to worse as Stuart was caught 2nd ball by Pete Reeh off Will Howell.  Then John H had Nick H caught by Pete Reeh in the next over.  Charlie Rowe enters the fray and has Nick H caught, Stuart D stumped and then caught, all by Guthrie Miller, who was having a stellar day behind the stumps, in one over for 3 runs!!!!  This effectively ended the Vipers’ game at 34 for 9 after 9 overs. Ryan Driver and Chris Pohl batted a valiant final 3 overs and added 30 runs for no loss but could only reach 64 for 9 and thus their first defeat by 37 runs.  Strangely, in this game, there were 7 catches, 1 stumped and 1 bowled.

PCC and AAS played next.  PCC batted first as they were 4 players short and AAS kindly allowed each pair to bat twice.  Jainish Parikh and Dexter West made a modest start with 20 runs plus 8 extras for the loss of Jainish who was smartly taken in a caught and bowled by Dimple.  Wez Masterton and Trevor Moolman picked up the pace despite a tidy over from Happy who bowled Wez. Wez was run out in the next over due to hesitancy between the batmen, but they punished Bilal for 20 off his over. Thus, the pair added 37 for 2 (minus 10 for the lost wickets) and PCC were 50 for 3 at halfway.

Jainish and Dexter returned and struggled against Happy and Ajay.  Bharat took a pair with accurate bowling restricting Jainish and Dexter to 18 for 3 but with 11 extras. AAS were in reasonable control at 64 for 6 after 9 overs.  Wez and Trevor returned for the last 3 overs. They made solid progress AAS’s best bowlers and made 27 for 1. PCC finished on 86 for 6 – not a winning total but defendable bearing in mind that AAS are big hitters but tend to lose lots of wickets.

AAS opened with Ajay and Bilial.  PCC borrowed an AAS fielder and Ryan Driver from RST Vipers to help out but 6 in the field was going to be difficult to contain the big hitters.  Bilal was on a charge and hit 16 from 3 balls but was marooned at the non-strikers end as Ajay was pinned down with 6 dots. Wickets were lost to fine bowling by Jainish and Wez.  22 for 2 and a satisfactory start. Dimple and Ravi arrived to flash the willow. Dimple scored 24 and the pair scored 37 but Ravi was bowled by Jainish and then run out by poor calling.  41 for 4 at halfway and some work to do.

Happy and Bassu took the crease but excellent bowling from Wez and Jainish took 2 for 9 and the pair added only 16.  PCC’s turn to be in control. Bharat and Jatin needed 33 of the last 3 overs. Despite a 6 from Jatin, it didn’t start well as Trevor M caught and bowled Bharat and had Jatin caught by Jainish off the next ball for zero net gain.  Dexter went for 15 as Jatin bashed another 6. 19 needed off the last over and Bharat was bowled first ball by Wez. AAS finished on 70 for 9 and lost by 16 runs. In this match most dismissals were bowled (6 of 9).

If you wish to know more about PCC visit www.pattayacricketclub.com