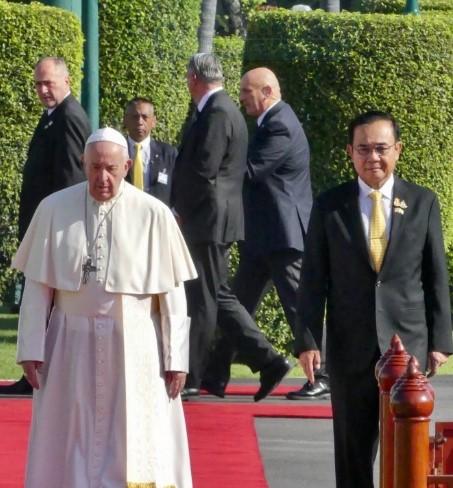 In his welcoming speech, delivered to a gathering of cabinet ministers, members of the diplomatic corps and the media during the Pope’s visit to the Government House this morning, the Prime Minister said that the Thai government has also been making similar efforts, be it promotion of basic human rights, guaranteeing religious freedom, promotion of a strong family institution, ensuring equal opportunities for all people in Thai society and promotion of social security for all, among others.

The Prime Minister also talked about Thailand’s role as the chair of ASEAN over the past year, as well as the achievements of the ASEAN Summit, held in Bangkok earlier this month, such as the cooperation among ASEAN countries in tackling marine debris, the development of alternative energy and migration.

He said he looks forward to closer bilateral and multilateral cooperation between Thailand and the Vatican.