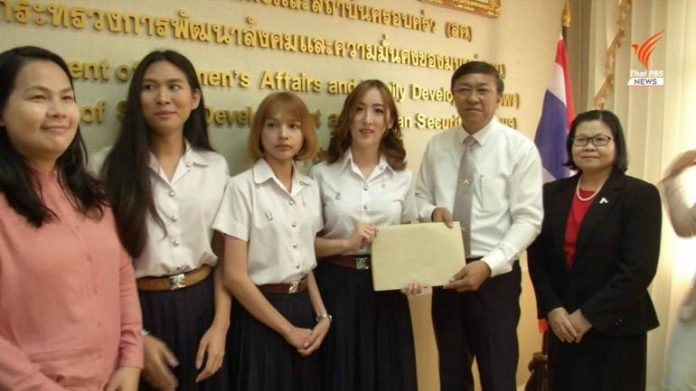 On November 15th 2018, Jirapat was forbidden to wear the female uniform in class and was insulted by a special lecturer. The incident ignited a determination to fight for gender equality.  Jirapat sought help from human rights activists, a sexual diversity group and transgender alumni of Chulalongkorn University.

Jirapat said Nada provided valuable counselling and support in the fight for equality for transgender students at other faculties in Chulalongkorn University.

The victory, represented by the announcement by the university on November 7th, didn’t come easy, given the obstacles Jirapat had faced on the way.  On January 11th, the Education Faculty dismissed a petition seeking approval for transgender students to wear female uniform in class.

Three days later, accompanied by human rights activists and members of a sexual diversity group, Jirapat sought an explanation from the faculty.

The incident went viral on social media, prompting the university to step in and delay the petition’s dismissal order, pending a ruling from a special board of the university.

Two more transgender students joined Jirapat in the campaign and, on February 18th, the university granted permission for Jirapat, but not the others, to dress as a female in class.

Then, on November 7th, the university issued a statement allowing all transgender students to wear uniforms in accordance with their gender identity.

When informed of the university’s announcement, human rights activist Nada praised Chulalongkorn University for its bold decision, expressing hope that other universities will follow Chula’s example.