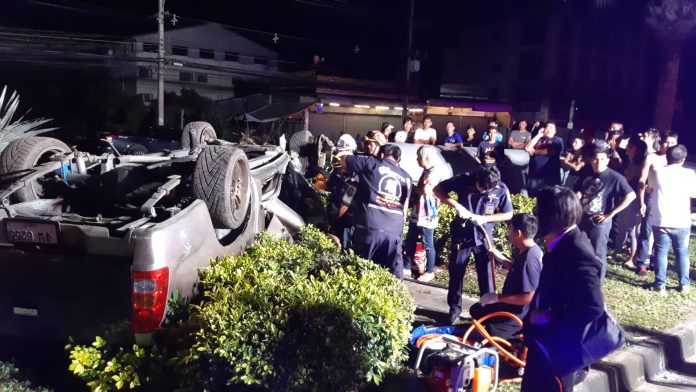 Pattaya –
Two people have sustained injuries after a pickup truck has collided with a motorbike and flipped this morning in Pattaya.

Capt Kanoknan Suksri of the Pattaya City Police was notified of the accident on Sukhumwit Road at 5AM.

Police, The Pattaya News and Sawang Boriboon Thammasathan rescue workers arrived at the scene to find an overturned pickup truck on the road.

Nearby they found a damaged power pole and damaged advertising board.

Two injured people were found inside the pickup truck which was the driver 35 year old Apichart Suknoi and another Thai man who was not identified.

Rescue workers used a hydraulic cutter to free the driver from the pickup truck.

Nearby the rescue team found a damaged motorbike whose driver was 41 year old Thongsai Kongkam.

He had sustained head injuries and broken leg.

All three victims were taken to a local hospital.

Relatives of the pickup truck drivers said they were in another car behind the victims and were on the way back to their home. They claimed the motorbike driver switched lanes without warning causing the accident.

The pick up truck then collided with the back of the motorbike before slamming into a power pole and an advertisement board.

However, police are continuing thier investigation to find the cause of accident.