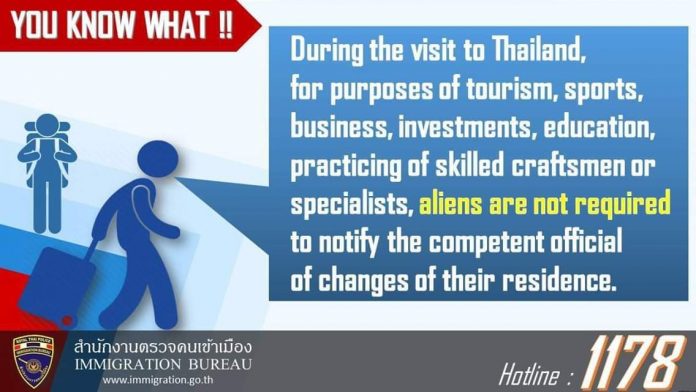 Phuket Immigration spoke to the Phuket News today, the first major division of Immigration to do so and clarified the notice posted over the weekend by Immigration that drew a lot of chatter and speculation.

They admitted that the notice could be confusing so sought to clarify it. The new measures and changes were announced at a meeting on September 9th, they said.

Here is what was stated:

Col Kathathorn of Phuket Immigration this morning admitted that the announcement may be confusing.

“The notice announces exceptions to the TM28 requirement for foreigners to report their whereabouts within 24 hours of arriving at their destination,” he said.

“These people are now exempt from having to file a TM28 reporting their whereabouts,” he said.

However, Col Kathathorn stressed that only people staying in the country on these types of visas are exempt.

“The TM28 requirement still applies to everyone else not covered by these visas,” he said.

“Filing a TM28 is no longer required by these people because of the TM30 requirement, which mandates that owners of properties must report any foreigners staying there,” he explained.
Read more at: