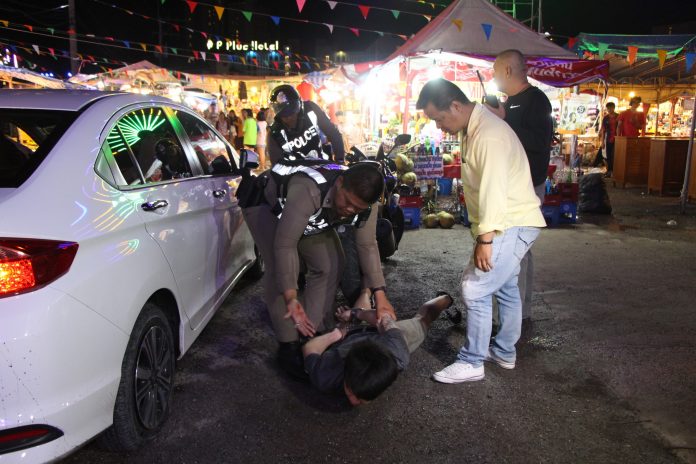 The Pattaya Police chased and opened fire after a car broke through a checkpoint last night around Midnight. Police found drugs inside the vehicle.

The white sedan broke through a checkpoint in front of a Macro store in Central Pattaya. Police chased after the sedan and opened fire in a successful attempt to shoot out the car tires and stop the vehicle.

The sedan had been driving with high speed into Soi Sukhumwit 48. The sedan ended up near a Morlam concert (Isan concert) and market full of residents and tourists on Third Road in Central Pattaya. The vehicle had it’s tires shot out and had pulled into the market in an attempt to flee on foot that failed.

Bullet holes were found around the sedan and wheels from the pursuit. Police also found ketamine inside the sedan.

Police also found crystal methamphetamine on the road that they believe the driver threw out the window during the pursuit.

Issara admitted to the police that the ketamine belong to him but claimed the crystal methamphetamine wasn’t his and denied throwing it out a window.

They were taken to the Pattaya City Police Station for further legal action. They are facing significant charges and significant jail time.