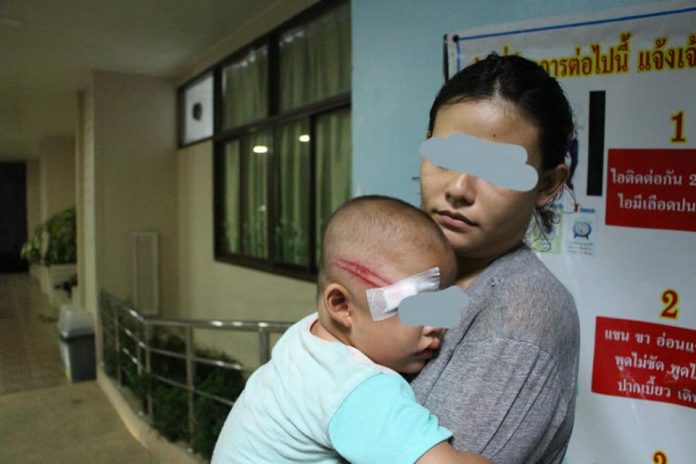 Nong Prue deputy superintendent Pol Lt-Colonel Krit Masook said he had visited the hospital to check on the boy’s condition earlier in the day.

He said the boy’s CT-Scan had cleared him of brain injury but doctors advised he needed to rest until he makes a full recovery.

He said he had assured the family that police would cover all their medical expenses and would ensure that justice prevailed.

Krit revealed that Jakkapop had initially been charged with assault – but it might be upgraded to a more serious charge if police inquiries showed that was warranted.

Police said Jakkapop, who had served as a police volunteer for nearly 10 years, was saddened by what had happened but still insisted that he hadn’t hit the toddler with a baton, as the family claimed, but just used a long piece of wood to block their way.

However, he said the toddler’s father was riding fast and he swerved to avoid hitting the piece of wood, so he quickly pulled it away, causing it to hit the toddler’s head. He maintains that it was an accident. The family state that it was intentional, although conceeded he may have been aiming for the father.

Police have already suspended Jakkapop from duty and may bar him from any further police volunteer work in future.

(facebook.com/dechalaw/) where he gives out legal advice – yesterday said the volunteer’s action could be construed as attempted murder within the |law.

The use of a weapon, having it land on someone’s head and the severity of the blow indicated that this may be considered an attempted murder because such an action could be perceived as having the possible consequence of the victim’s death, he explained.

The police volunteer may therefore face the charge of attempted murder – an offence punishable by two-thirds of whatever prison sentence an offence would merit when the conviction was for murder.

Decha said police volunteers were regarded as normal citizens who had no authority to make any arrest.