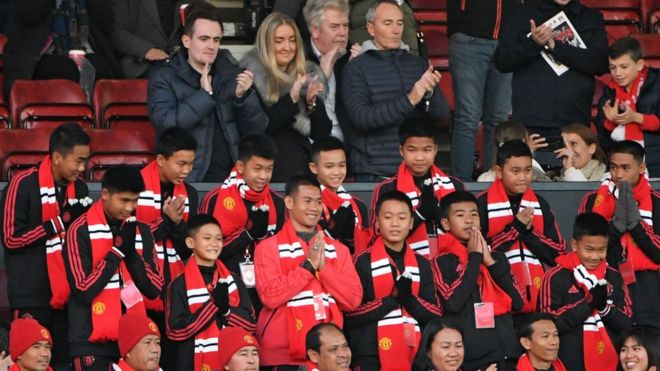 The 12 Thai boys and their soccer coach, whose rescue from a waterlogged cave after an 18-day ordeal captured the world’s attention, could be about to sign a deal with Netflix.
The streaming giant said it was partnering with the production company behind hit film Crazy Rich Asians — SK Global Entertainment — and 13 Tham Luang Company Ltd to tell the boys’ “harrowing and heroic story,” according to a statement released to CNN by Netflix, South East Asia.

The Thai government’s Creative Media Committee has been scrutinizing bids on behalf of the boys and their coach. 13 Tham Luang Company Ltd was set up on February 11 to “negotiate rights” and manage the rescued football team’s future media opportunities.

A contract has not yet been signed but both sides have agreed to the terms, according to the statement. If a deal goes through, SK Global Entertainment will have the life rights “to use the stories of the victims to produce creative media on Tham Luang incident.”

The plight of the group, all members of a local soccer team known as the Wild Boars, captivated audiences around the world in the summer of 2018 when they became trapped deep inside in a submerged cave complex in Northern Thailand.

A daring international rescue effort was launched to reach the boys, aged between 11 and 16, who were trapped in the pitch black, with no food and rapidly rising water levels alongside their 25-year-old coach.

Divers involved in the rescue described dangerous conditions, with fast-moving shallow water passing through very narrow passages — so treacherous were the conditions one Thai Navy SEAL died during operations.

The successful rescue of all 13 members of the group was hailed as a “miracle.” The boys have since become minor celebrities, attending the Youth Olympic Summer Games in Buenos Aires, Argentina where they played a friendly match at the Monumental Stadium, and even appearing on US talk show “Ellen.”

If contracts with SK Global Entertainment and Netflix are signed, the boys and their coach will donate 15% of all income generated from the deal to the Thai Governmental Disaster Mitigation Offices.