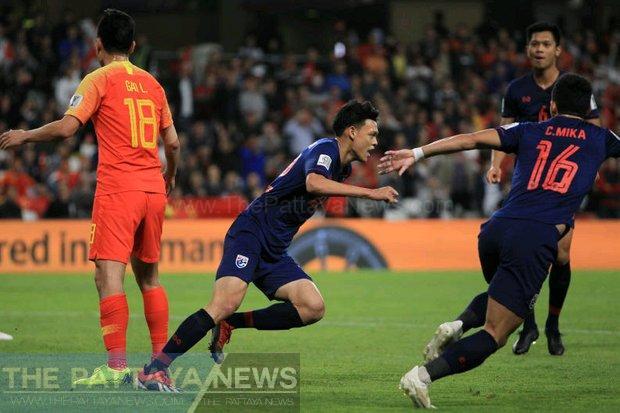 It took Marcello Lippi’s men a while, but China finally got into their stride in the second half against Thailand, scoring two goals in quick succession to seal a victory that looked incredibly uncertain at the break.

After some early pressure from China, Thailand turned things in their favour and opened the scoring through Supachai in the 30th minute, when the 20-year-old, who created plenty of problems for the Chinese defence in the first 45, latched onto the end of deflected shot to drive one home from six yards out. The War Elephants continued to control the rest of the half and went in at the break the better side and seemingly well positioned to record their first victory over their opponents since 1990.

But whatever coach Marcello Lippi said to his players at half time seemed to get through, as China came out all guns blazing after, creating wave after wave of attack in the first fifteen minutes. But despite getting themselves into several goal scoring positions, they just could not find a way past Thai keeper Siwarak Tedsungnoen, who made an incredible stop with his leg in the 61st minute to deny Yu Dabao from almost point-blank range.

Just six minutes later, he made an equally impressive save to stop Zhi Xiao’s header, but this time he could not hold onto it and Zhi Xiao was quickest to react, slotting it past the Thai keeper to get China back on level terms. After having staved off the rampant Chinese attack for more than 20 minutes, Thailand’s resistance finally fell.

Team Dragon’s second goal followed just four minutes later after Thailand conceded a penalty kick, which Lin Gao hammered into the top right corner, leaving Siwarak with no chance. Lippi’s side continued to dominate the rest of the game as they went in search of a third to kill off the their wounded opponents. The third never came, but in the end, the two goals were enough to see China through to the quarters, where they will face either Iran or Oman.