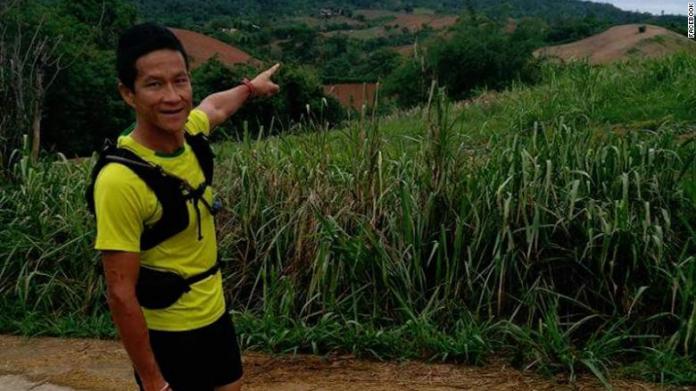 A former Thai Navy diver who had volunteered to help rescue 12 boys and their coach from a cave in northern Thailand has died, according to government officials.

Former Sgt. Saman Kunan, an ex-SEAL, died at 2:00 a.m. Friday local time (2 p.m. Thursday ET) due to a lack of air while attempting to return to a command center deep underground, Chiang Rai Deputy Governor Passakorn Boonyalak said.
The command center is located two kilometers (1.2 miles) inside the cave, where the young soccer team and their coach have been trapped for almost two weeks.
Kunan, 38, was returning from delivering oxygen tanks to the cavern where the boys are when he ran out of air while underwater.
One of Kunan’s longtime friends, Sgt. Anuram Kaewchano, told the press he was shocked to learn the news.
“I can’t believe this happened,” he told the Associated Press by phone. “He was very fit, he exercised every day, and he was a triathlete. Our last trip together was to Malaysia.”
He added that the last time the two spoke, “we talked about the kids — whether they were out yet.”
“Diving is always full of risks,” Navy SEAL chief Rear Adm. Aphakorn Yookongkaew said. “He may have passed out, causing him to drown, but we have to wait for the autopsy,” he added.
A military aircraft will carry Kunan’s body from Chiang Rai to Satthahip Navy Base Friday evening. A funeral service with full military honors will take place there, and then at his home town in the province of Roi Et, northern Thailand. It has not been announced if there will be a public service.
Volunteer diver Mikko Paasi said that the mood at the camp had changed since the rescue team learned of Kunan’s death.
“Definitely you can feel it that it has an effect, but we’re moving on. Everyone is a professional so we’re trying to put it away and avoid it happening again,” said the Finn, who is a long-term resident of Thailand.
“Everybody is focusing on getting these boys out — keeping them alive or getting them out.”
Pornphimon Pansurin, a counselor from the nearby Darunrat School who teaches Ekarat Wongsukjan, one of the missing boys, said the missing boys may feel responsible for the tragedy.
“If they learn about what has happened they will blame themselves,” she told the press. “They will feel very guilty.”
At this time, officials have said they will not be informing the children of the death as it would cause un-needed stress according to multiple doctors.
The operation to get the children out continues.
Sending