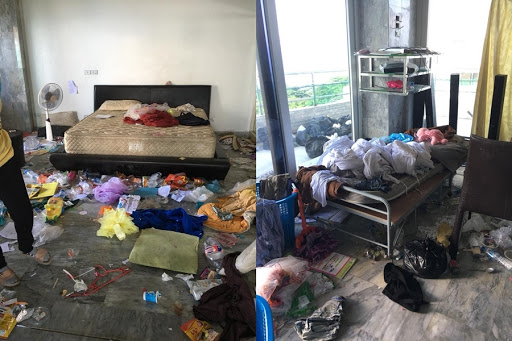 Above are the horrific photos, posted on Facebook from user Jindaporn Ao Amam, a stated friend of the landlord who seeked to make it go viral.

She states that the landlord rented this condo, said to be worth 10 million baht, to a foreign lady with two daughters for 30,000 baht a month. They rented the condo for roughly two years and had always been timely with the rent and according to other tenants quiet.

However, recently, all contact ceased and the rental checks stopped coming. When the owner went to investigate this is the condition the apartment was left in. Additionally, the toilet was shattered and kitchen torn apart and several items, like a television and stereo system, stolen.

The landlord has passed on the passport information of the tenants to the Thai police who hope to hunt them down, however, stated that they believe they have left the country but will be blacklisted from returning.