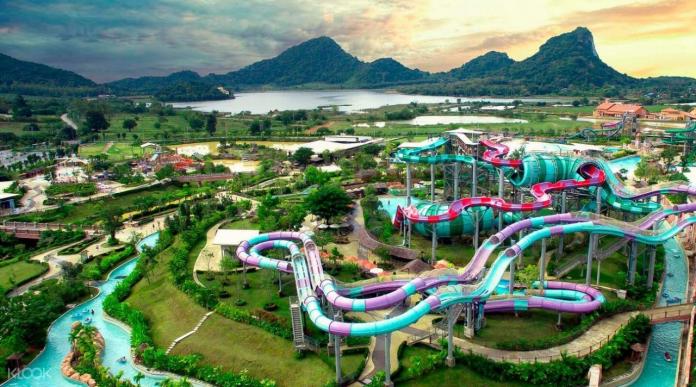 Anyone who has been to Ramayana water park, nestled between Silverlake Winery and the famous Buddha Mountain has noticed that it has ample space and room to expand and recently a lot of bulldozing and clearing land in and around the park has taken place.

Ramayana, who recently celebrated their two year anniversary and is the number one water park in Thailand, the 3rd in all of Asia and 19th in the world has bigger plans and goals in sight…a world class Theme Park and Resort right outside of Pattaya.

Johannes Pattermann, sales director at Ramayana, said: “The Ramayana Water Park was opened in 2016 with an investment of Bt1.5 billion on a 106-rai area surrounded by the beautiful nature of Khao Chee Chan and Silver Lake Winery. We are able to serve 7,500 tourists per day and we have been selected by TripAdvisor as the largest and best water park in Thailand, the third in Asia and the 19th in the world.”

He said in the future the park plans to invest in amusement facilities which will include non water attractions such as roller coasters and thrill rides as well as world class events that cater to a larger number of tourists.

“The tourism industry of Chon Buri and Pattaya, as well as of Thailand as a whole, is expected to grow continuously. Pattaya’s tourism is also changing into a family destination with sports tourism, and this is good for the image of Pattaya. It also goes in harmony with the policies of the Thai government and Tourism Authority of Thailand of establishing Thailand as a family destination. The Ramayana Water Park is ready to answer to this policy, and we are prepared to serve large organisations, group tours and families on a larger scale. With our large space and numerous facilities, being the largest water park in the country, we are able to respond to the requirements of large corporations effectively,” he said.

There was no timetable given for the new attractions and park expansion but based on the bulldozing and construction outside of the park plans are well underway.