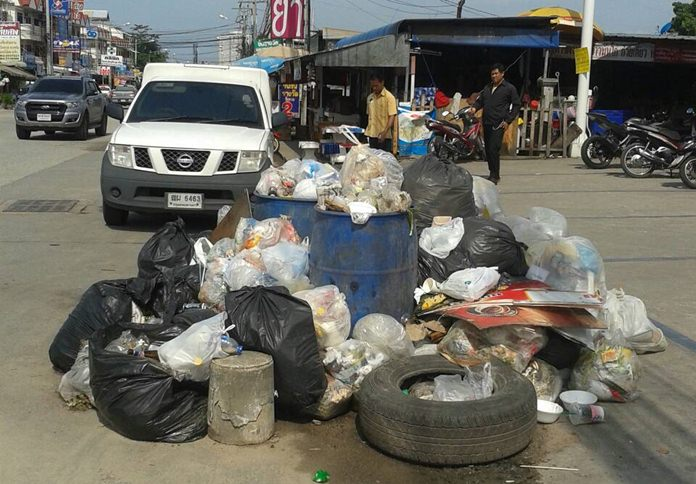 PATTAYA:–Pattaya’s current garbage collector won’t invest in more trucks or staff, its dumps are at capacity and the budget already is busted. The city’s trash crisis is getting worse and city hall appears helpless to solve it.

City council Chairman Anan Ankanawisan met with Pattaya’s mayor, his top deputies, local environmental agencies and other city department heads April 27 to brainstorm ideas on what to do with the tidal wave of waste Pattaya is drowning in.

Environmental workers said the original estimate that Pattaya is generating 450 tons of garbage is wrong by as much as 30 percent now. The Khao Maikaew dumpsite is nearly full and the Sukhumvit Soi 3 transfer station cannot accept any more garbage.

Meanwhile, trash cans around the city are overflowing and left uncollected for days as the current trash collector has proven unable to keep up. Yet, at the same time, the contractor refuses to spend more on trucks or staff and states they are not being given enough money by the city to properly handle the waste situation.

We will continue to update this as we get more news. In Thailand, waste collection is not handled by the government like many western countries or the city but rather is outsourced to private independent contractors who bid (normally by the lowest price) to work for the city who then pays them. This issue could be ongoing for some time.