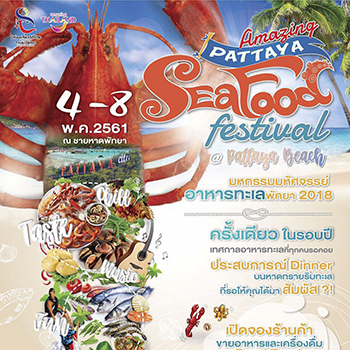 The annual and popular Seafood festival is being jointly organised by the Chon Buri Provincial Administrative Organisation, Pattaya City, the Tourism Authority of Thailand and Pattaya Tourism Business Operators Association.

More than 200 booths from seafood restaurants in Pattaya and surrounding areas will be located on Beach Road, primarily from Central Road down towards Soi 3. They will be dishing out their fare, to the accompaniment of music performances by popular Thai bands.

Dozens of tents and cooking stations have been set up on beach road for the expected thousands of Thai nationals and tourists to visit the Festival. Several popular Thai bands will also be performing at venues throughout the city.

This year one may notice many signs up on Beach Road that warn independent vendors who have not paid for a booth that this year selling on your own (such as independent crab and shrimp sellers who can be found on the beach year-round) will be forbidden. Police and City officials have warned that they will be strictly enforcing this rule and patrolling the festival area to ensure this does not happen.