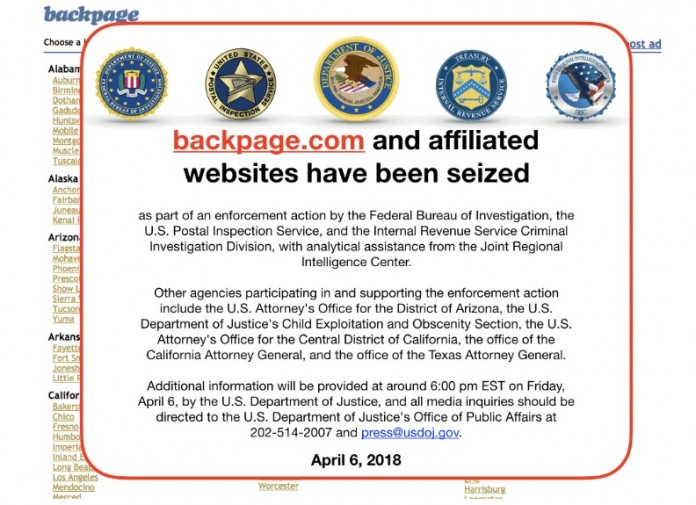 Backpage.com, the website known for its sex and prostitution-related classified advertisements, was shut down and seized by the FBI on Friday, according to reports and a large notice displayed on the site’s homepage.

“Backpage.com and affiliated websites have been seized as part of an enforcement action by the Federal Bureau of Investigation, the U.S. Postal Inspection Service, and the Internal Revenue Service Criminal Investigation Division,” the notice on the site read.

The home of the websites founder, Michael Lacey, was also raided on Friday and Mr. Lacey placed under arrest.

Carl Ferrer, the CEO of Backpage.com, had been previously arrested in 2016 and charged with multiple counts, including pimping minors. Ferrer and other Backpage executives have not been convicted with wrongdoing, however.

The site – which is already the focus of multiple criminal investigations – has prompted lawmakers to reconsider legislation that limits the immunity of websites for the actions taken by their users.

Members of Congress have also investigated the site for its alleged role in sex trafficking.

“This is great news for survivors, advocates, and law enforcement,” Sen. Claire McCaskill, D-Mo., who has investigated the site alongside Ohio Sen. Rob Portman, told the Associated Press.

Cindy McCain, the wife of Arizona Sen. John McCain, and an activist against human trafficking, told the Associated Press that she heard that in addition to raiding Lacey’s home, every office of the site around the world was raided.

“They’ve confiscated everything and shut the website down,” McCain said, adding that Friday was a “good day.”

Backpage.com lets users create posts to sell items, seek a roommate, participate in forums, list upcoming events or post job openings. But the site also has listings for adult escorts and other sexual services, and authorities say advertising related to those services has been extremely lucrative.

According to the notice on the site, authorities will release additional information on the seizure later Friday night.