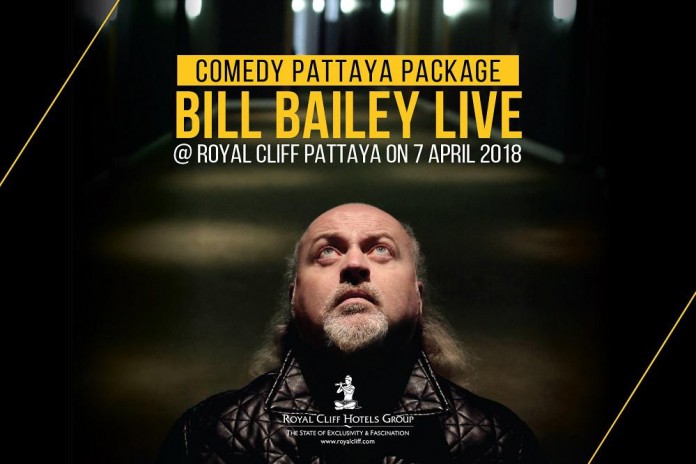 Pattaya, Thailand – One of the world’s most loved comedians, Bill Bailey, is bringing his show ‘Bill Bailey Live in Asia Tour 2018’ to Thailand and has chosen the Royal Cliff Hotels Group for his one-night-only show in Pattaya city. Presented by Magners International Comedy Festival and Magic Rock Pte Ltd, the stand-up comedy show will be held on 7 April 2018, which will start at 8 pm at the Royal Summit Chamber of the Royal Cliff Beach Hotel.

Bill Bailey Live in Asia Tour 2018 is a compendium of traveler’s tales and the general shenanigans of twenty years as a travelling comedian. With brand new material interlaced with Bill Bailey’s signature musical virtuosity, surreal tangents and trademark intelligence, Bill Bailey tackles politics, philosophy and the pursuit of happiness.

Bill Bailey has enjoyed success on the live stage for decades and had previously toured Limboland and Larks in Transit in Hong Kong, Singapore, Australiam New Zealand, UK and all over the world, enjoying packed houses and raving critics. This year, Larks in Transit Asia Tour 2018, an ever evolving show, will feature brand new materials gathered from his tours and encounters over the last year that promises to give the audience a hilarious night to remember!