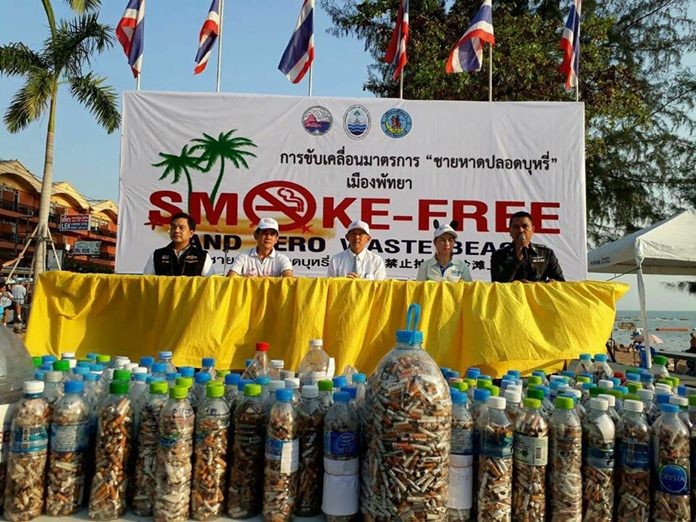 Deputy City Manager, legal chief Sretapol Boon­sawat and Thanet Manoi, director of the Marine and Coastal Resources Management Office met Feb. 13 with public health workers, tourist police and other city departments to outline the public-relations effort to get people to adhere to Thailand’s ban on smoking on the beach.

The ban took effect Feb. 1. Until now, Pattaya officials had concentrated their efforts to publicize the ban to Jomtien Beach. Having declared victory there, the city is moving to Pattaya and Naklua beaches to educate both beach-goers and vendors about the ban and its penalties. The Pattaya News has walked this area on numerous occasions and can state that the designated smoking areas do indeed seem to be working.

A parade today, scheduled for 3:30-5 p.m. on Beach Road, will be the first salvo in publicizing the legal restriction on smoking as well as its health hazards. A beach cleanup also is planned. This parade is expected to cause traffic problems but will send the message that smoking will not be tolerated on the beach. (Note, smoking on the actual sidewalk/beach walk is acceptable. Smoking on the actual sand is not.)

We here at Pattaya news will continue to give you updates on this. We can also confirm that officials are not CURRENTLY fining on Pattaya Beach for violating the smoking rules, however, this is due to come in the near future after the publicity campaign.