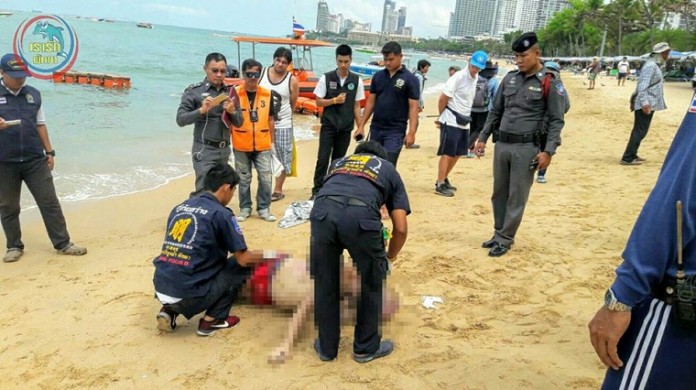 At 10:40AM on Tuesday, February 20th 2018, a Russian tourist whose name has not been released, 50 years of age, drowned during a swim at Pattaya Beach. He was visiting Pattaya with his wife who had to witness the horror of watching her husband drown in front of her.

The tourist had been swimming in a designated swim zone near the far end when he appeared to run into trouble. A good Samaritan swam out and helped pull the man ashore as dozens of stunned onlookers observed. Rescue workers from the local foundation were called and made a quick response, however, were unable to revive the man and he passed away on the beach.

His wife, also from Russia, was inconsolable and was demanding to know why they were no life guards present to authorities. Local Thai’s have also commented saying that if Pattaya and Jomtien beaches had regular lifeguards that were well trained and watching the ocean lives could be saved. It is a fact that there ARE lifeguards, however they mostly stay at set locations near Soi 6 and Soi 9 and are not placed on the beach directly.

Several years ago Pattaya City did install lifeguard booths, however, they were not manned and eventually were removed as they were falling into a neglected state at the time.

Our thoughts are with the wife and family of the Russian tourist.