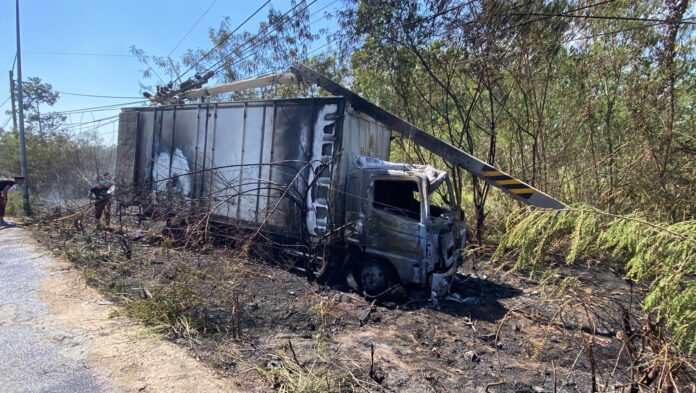 A six-wheeler suddenly went up in flames when it collided with a power pole today, January 22nd.

Sawang Boriboon rescuers and two firetrucks rushed to extinguish a fire that was engulfing a truck at 12:30 PM on a motorway in the Takhian Tia subdistrict of Banglamung district, Chonburi.

The truck crashed into a power pole located between 107-70 kilometers markers. It broke the pole in half. The truck was engulfed in flames when the authorities arrived.

The fire was put out only when it had considerably damaged the truck. The driver, Mr. Sophon Amornteeravej, suffered minor injuries and was transported to Laem Chabang Hospital.

Before that, the 34-year-old victim told rescuers that his six-wheeler’s tires suddenly exploded and caused him to lose control of the vehicle. The truck then crashed and toppled a power pole, dragging a bunch of electrical wires onto the truck and ignited a fire.