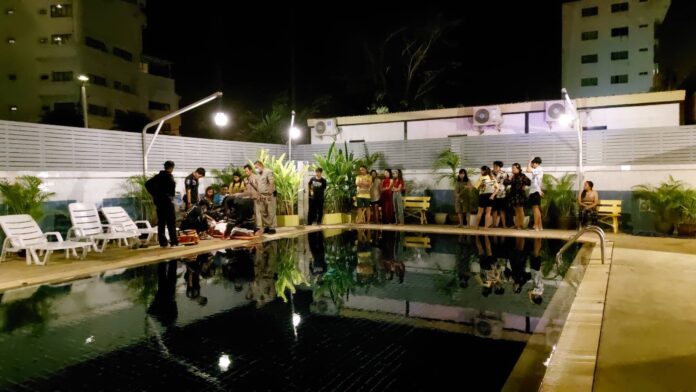 A Thai tourist was rushed to hospital after nearly drowning in a pool at a Pattaya hotel this morning, January 22nd.

Sawang Boriboon rescuers responded to a newr drowning incident a little past midnight at Thongsathit Jomtien Beach Hotel in Soi Jomtien 14 in the Nongprue subdistrict of Banglamung district, Chonburi.

The victim, Mr. Amnuay Bamrung, was found unconscious on the edge of a hotel’s pool. He is 42 years old and was on a vacation from Bangkok, his unidentified group of friends told The Pattaya News.

The victim reportedly drank alcohol and decided to swim alone in the pool while his friends were partying on the edge. The friends then noticed the victim drowning, so they immediately jumped into the pool to rescue him.

Sawang Boriboon rescuers provided CPR to the victim before rushing him to the nearest hospital.