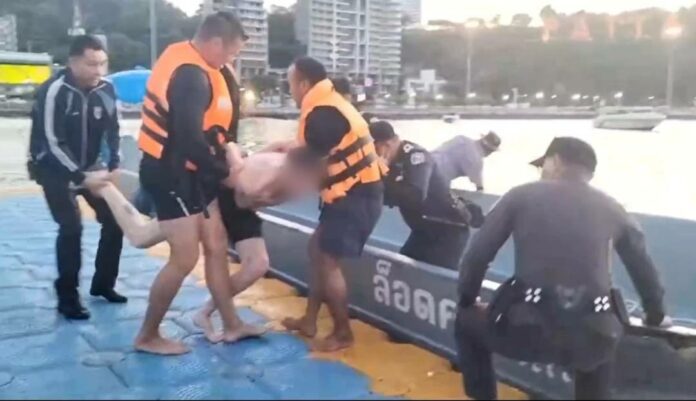 A British man who was suspected to have mental illness suddenly jumped off Bali Hai Pier in Pattaya and swam away from rescuers, resisting aid, on Saturday, January 7th.

Pattaya security officer and eyewitness Mr. Thanongsak Chimluang told local media that he was facilitating tourists at Bali Hai Pier when he spotted one boat that abruptly stopped from docking.

Upon closer inspection, the officer found that one foreign man was floating in the sea, but he was not in danger of drowning because he was able to swim and was, in fact, attempting to swim away from the boat.

The man acted aggressively and refused assistance from Sawang Boriboon rescuers, according to Thanongsak. He tried to hide behind Bali Hai Pier’s foundation post, but rescuers were eventually able to lasso him with a rope and lifted him off the water onto a boat after over an hour.

Later identified as a British national, the man still resisted help and fought with rescuers and police as he was being transferred to the Pattaya police station. The man was about 45 years old, according to police, however, his name could not be identified. Police believed the man suffered from a mental condition.

Another eyewitness said he saw the tourist suddenly jumping off Bali Hai Pier into the sea when the boat he was riding on from Koh Larn was about to dock.