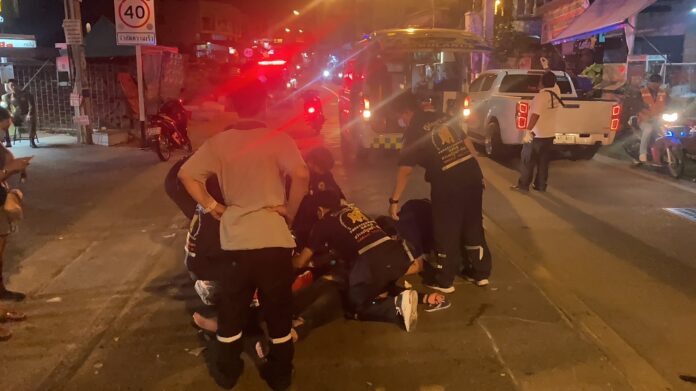 A 42-year-old woman was in critical condition after crashing her motorbike into a baht bus that was exiting a convenience store in Pattaya. The baht bus driver reportedly admitted that his vehicle’s bumper poked out onto the road and might have caused the accident.

The victim, identified as Ms. Sunita Thepmanee, was a chef at an unnamed restaurant in Pattaya, according to Sawang Boriboon rescuers who came to her rescue. She was found sprawling unconsciously on the road in front of a 7-11 convenience store in Soi Kho Phai 5, South Pattaya.

The rescuers found her yesterday, January 3rd, at 8:30 PM. The victim suffered severe head injuries and was rushed to Banglamung Hospital. Her blue Honda Wave motorbike was discovered near the accident scene along with a baht bus operated between Na Kluea – Chakngeaw. The cabbie, identified as Mr. Narong Pinkaewk, 61, told The Pattaya News that he was waiting to exit a convenience store when the victim suddenly crashed into him. He confessed that his car’s bumper slightly protruded onto the road, but also claimed that the victim lost control of her motorbike and collided with him.

The cabbie was being interrogated by Pattaya police. The authorities said they would review the store’s CCTV cameras to find what caused the crash.