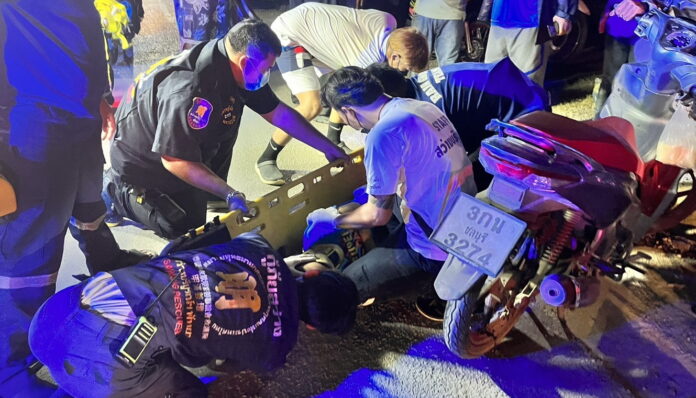 A 11-year-old girl has sustained serious injuries after her shoelace became entangled in a motorbike in Banglamung.

Emergency responders were notified of the accident last night (December 16th) at the entrance of Chaiyaphon Vithi 8 Road in Nongprue.

They and the Pattaya News arrived at the scene to find the 11-year-old girl who had sustained severe left leg injuries and was bleeding heavily. She was rushed to a local hospital. Nearby, rescue workers found the motorbike with parts of her shoelace still stuck in the back wheel.

The motorbike rider, Mr. Wiratat Wuttiwan, 26, who is alsl the girl’s brother, told The Pattaya News, “The motorbike lost control due to my sister’s loose shoelace getting sucked into a part of the wheel before my sister fell down. Her left leg had become stuck within the rear wheel.”

Wiratat was not injured and the girl remained at a hospital as of press time. Unfortunately, early reports were that her leg may need to be amputated.