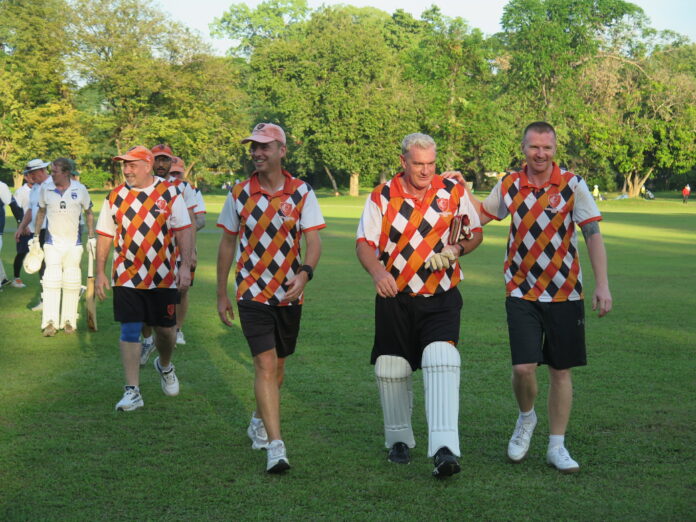 The day started bright and early for the umpires, which included yours truly, but PCC did not have a match until 1 pm.  They had the luxury of watching a very fluid scenario unfold before them from their 2nd place at the table.  Lanna beat Lamphun which put Lanna in the lead and Lamphun needed to beat PCC for a chance of getting second place.  Lanna then lost to Alibaba as Bobby Raina was not playing (remember my song from yesterday?) which changed the plot. If PCC lost to Lamphun, PCC would be 3rd and thus Lamphun needed to be dispatched – not an easy task when Chan Chai is their opening batsman (he plays for Thailand).

Cometh the hour, cometh the men.  PCC won the toss and decided to bowl. Lamphun’s Chan Chai opened with Cher against Wez.  Chan Chai skied a ball to mid-on but neither Luke nor Jainish could get to it and he survived.  A respectable 11 from the over. Jainish bowled the 2nd over and good running from Chan and a 6 from Cher pushed the score to 26.  Andy got punished by fine batting from Cher with balls behind square or point.  44 for 0 after 3 and a good score looked possible.  Simon Wetherell had Cher catch the first ball by Wez on the long-on boundary and nearly had Chan in the same over. Chan retired on 33 and Choo and Ton batted out the last over against Luke.  Some good footwork and throwing from the fielders restricted Lamphun to 68 for 1.

Wez and Luke opened against Cher who was blasted around the ground for 16. Andy’s first ball to Wez is caught by Chan Chai but he carried it over the rope for 6.  More massive hits from Luke and 19 off the over.  Pit got the same treatment and was unlucky when Choo dropped Luke at long-on. Things got worse as Wez was dropped by Choo in the same over and that proved to be extremely costly. Luke retired on 36 not out from 10 balls.  52 for 0 off 3 overs and PCC were ahead.  Jainish went in to help Wez who hit a 6 and was then caught by Andy off Choo for 19.  Simon W entered the fray at 63 for 2 and 6 were needed off the last over from Chan Chai. Jainish got a boundary and Simon got the winning run with 3 balls to spare.  PCC topped the table and would play Lanna in the final.

Could PCC get everything in one sock for the final big push and would Lanna’s song (You only win when Bobby’s playing) come true?  Wez lost the toss and was asked to bat. Wez and Luke opened against Bobby and immediately went on the attack.  16 off the over.  John Scales was walloped all over Chiang Mai by the batting machine called Luke Stokes who retired on 33 from 10 balls. 38 for 0 after 2 overs. Jainish continued the onslaught against Hugh and Wez survived a dropped catch by Neville at deep extra cover. 57 for 0 after 3. This was going to be a big score. Jainish hit out against Neville Mclean and got bowled for 14 from 5 balls which brought in Simon W.  Simon got a top edge from his first ball and was caught and bowled by Neville who was on a hat-trick. 68 for 2 off 4. Wez smashed Ritchie for 16 from 3 balls and retired on 36 which left Simon Philbrook facing the last 3 balls.  Not to be outdone, Simon clattered 14 runs for 30 off the over and a score of 98 for 2. 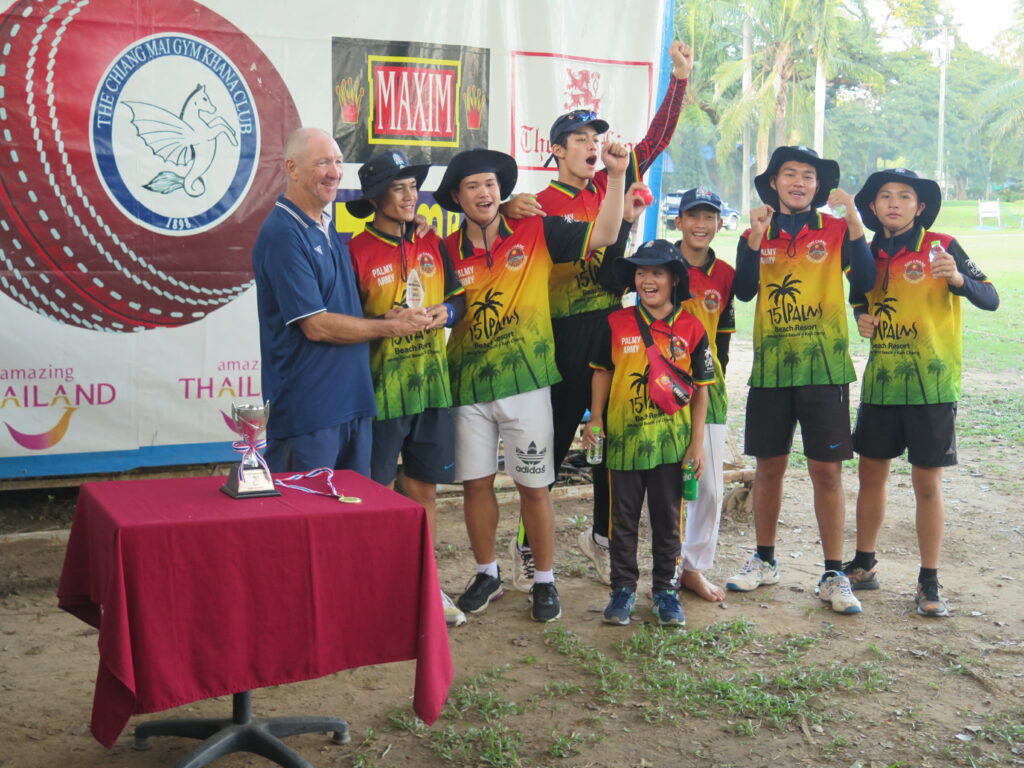 Lanna began their mountainous climb with Neville and Bobby against Wez.  Jainish dropped Neville at long-on, but it was a difficult chance. 9 off the over.  Jainish bowled rather untidily and was taken for 17 including extras. 26 for 0. Andy bowled some dot balls but the openers still got 14 runs and 40 for 3 and thus well behind the asking rate of 19.6/over. Simon W got attacked by Bobby with enormous boundaries and went for 18, but it was still not enough.  41 needed off the last over to be bowled by Luke. Bobby swung and got a nick which was caught behind by Simon P for 22. John Scales went to the crease but only enabled a run out of Neville for 22. Some extras and 2 dot balls closed Lanna’s innings on 66 for 2 and PCC won by 32 runs.   PCC was the Chiang Mai 6 Champions along with Chiang Mai 8’s, BCL Div A, and the Koh Chang beach Tournament.

In the Gentlemen’s Division, Koh Chang was the outstanding team and rightful winner, beating CMSCA by 6 runs in an All Thailand Boys final.

The presentation was duly conducted by Chops (Rob Bernard) who thanked the ground staff, bar staff, and the match officials (umpires and scorers) for their efforts in an excellent tournament.  The trophies were presented to PCC (Players Trophy) and Koh Chang and the Man of the Tournament went to Luke Stokes for his superb batting.  Some Stokes Stats:  147 runs from 5 innings at a strike rate of 267.  Highest score of 36 from 10 balls.  Highest score in boundaries with 116, ie 79% of his score.  6 6’s and 20 4’s.  Other PCC stats: Simon W had PCC’s best bowling figures with 2 for 11. Simon P had the best strike rate, albeit 3 balls, of 467.  The best PCC bowling economy was Luke stokes at 12.4 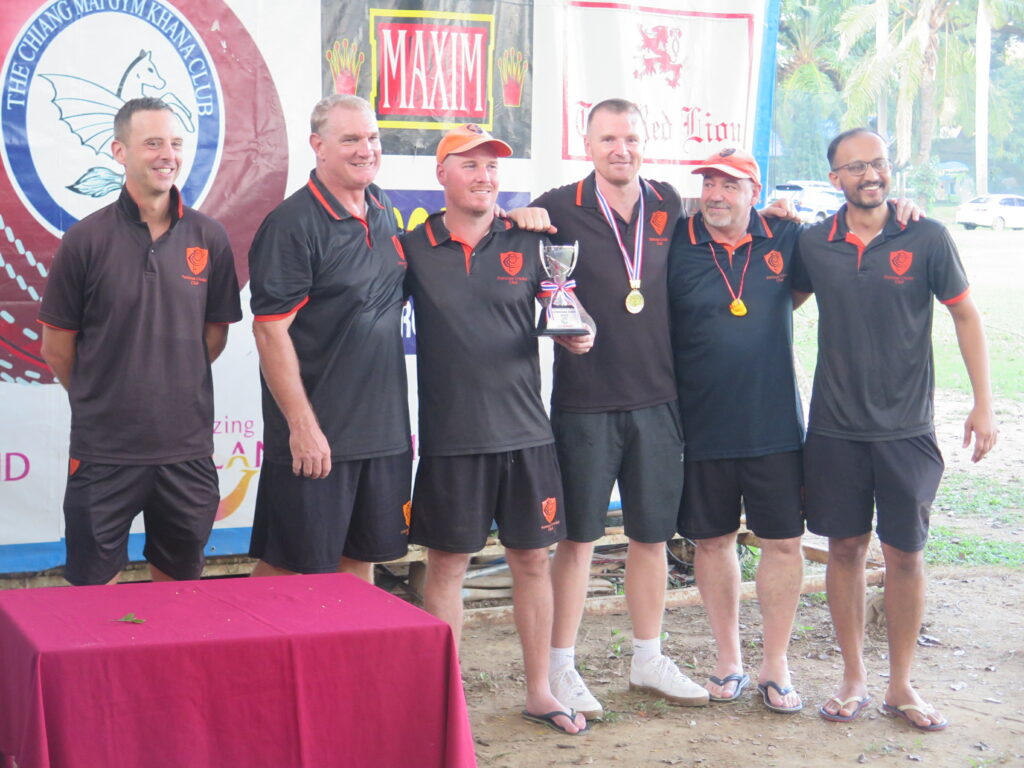 As always, a great event, and PCC will be there to defend their titles next time around.