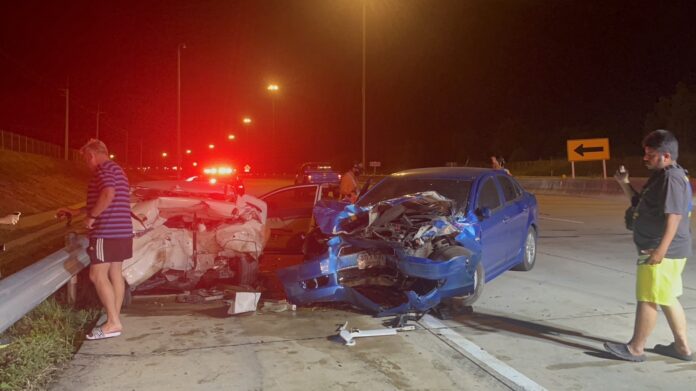 A 45-year-old Thai man has been pronounced dead after he parked his car on a roadside to answer the call of nature before another vehicle crashed into him in Banglamung.

The Highway Police were notified of the accident at 1:00 A.M. early this morning (December 11th) on the Motorway Pattaya- Map Ta Phut Road in Nongprue.

Emergency responders and the Pattaya News arrived at the scene to find two damaged sedans. The surviving driver, Ms. Wanpen Tanajaroenchai, 40, was at the scene.

The other driver, Mr. Tarathep Kruaariya, 45, had sustained severe injuries outside his sedan. He was pronounced deceased upon arrival at a local hospital.

Two other injured people inside the sedan were found who were Ms. Arthitaya Jankana, 44, and a nine-year-old girl.

A third passenger was uninjured, but asked not to be identified, and told The Pattaya News that Tarathep’s vehicle stopped on the roadside to allow both men to relieve themselves.

Police are continuing their investigation to find the exact cause of the accident for further potential legal action.