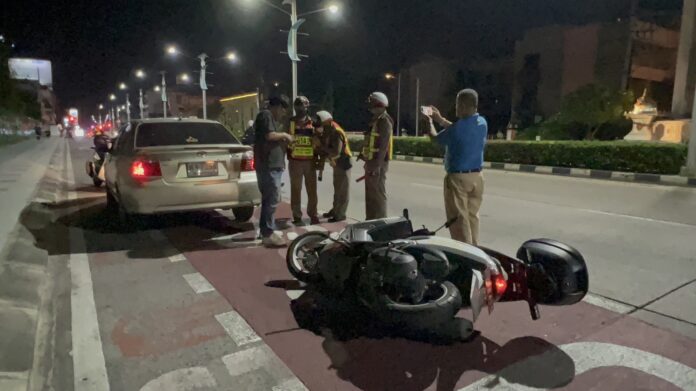 An intoxicated driver was arrested after he made a failure of an attempt to break through a police vehicle checkpoint in Pattaya.

The Pattaya City Police set up the checkpoint after midnight today (December 11th) on the North Pattaya Road in Naklua. Many drivers were reportedly arrested for drunk driving.

The Pattaya City Police told the Pattaya News that they observed a sedan swaying while driving into the police checkpoint. Police tried to stop the sedan but the sedan driver slammed on the gas trying to escape before crashing into a police motorbike nearby. The traffic police Senior Sergeant Major Rapeepat Prommin who was on the motorbike had managed to leap off it and was not injured.

The intoxicated driver was identified as Mr. Nattanet Puttawong, 38, who after a brief period of conflict got out of his sedan and said sorry to police. Nattanet admitted to having drank alcohol before driving. His alcohol breath test was well over the legal limit. Nattanet was taken to the Pattaya City Police Station for further legal action.