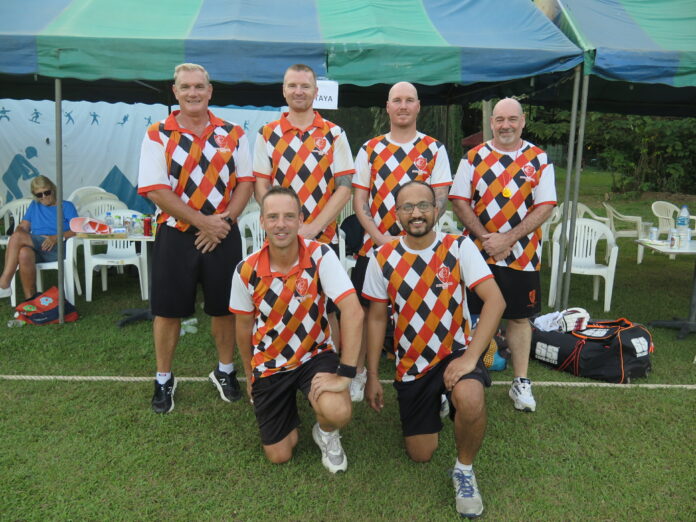 To paraphrase a famous shark movie, “We’re going to need a bigger trophy cabinet.”  2022 has been a good year for PCC having won the BCL A division, The Chiang Mai 8’s for the 3rd time, The Koh Chang Beach Tournament, and now the Chiang Mai 6’s. Let us hope that the 2022/3 season continues in the same vain.

The 2022 Chiang Mai 6’s were held on 4th and 5th Dec. There were 10 teams divided into two divisions, The Players (PCC, Lanna, Alibaba, Lamphun, and The Chiang Mai All Stars) and The Gentlemen (Floggers & Robbers, Shrewsbury School, Koh Chiang, Black Swans, and CMCSA).  All players would bowl one over except the wicketkeeper.  Batmen scoring 31 would retire not out.  Last-man-standing rules apply.  Wides and No Balls would count as 3 runs and would not be re-bowled.  4 points would be awarded for a win and there were bonus points for wickets and runs.  Each team would play 4 divisional matches and the top 2 teams from each division would play in their final.   A par score was 60-65 runs. 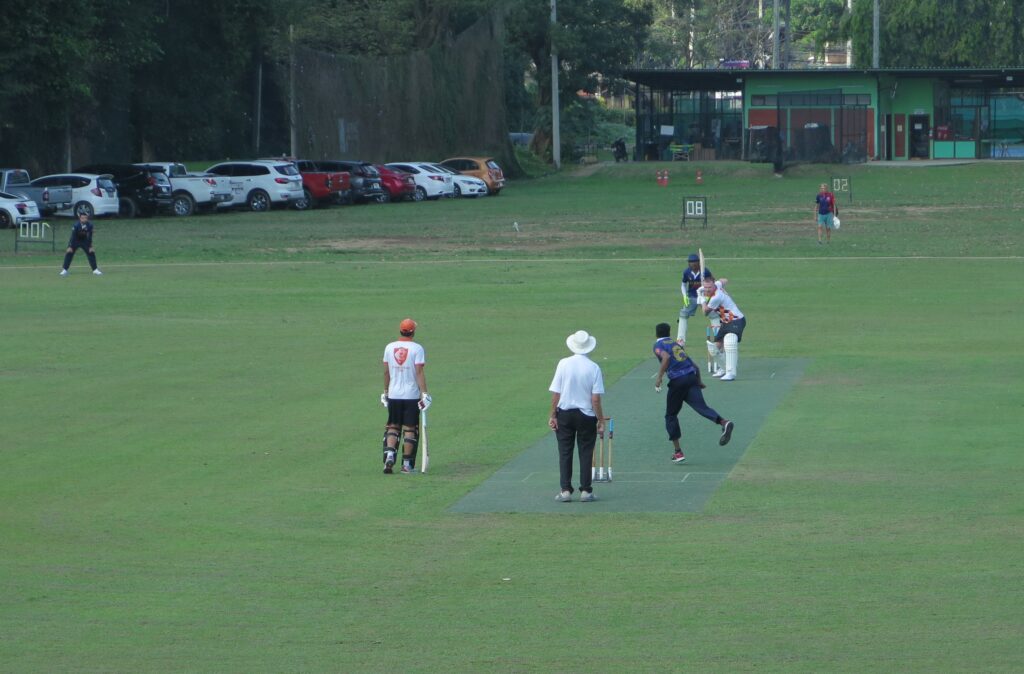 PCC’s first match was against Lanna who normally played in The Gentleman’s division, but they had been bolstered by the presence of Bobby Raina who was also playing for Koh Chiang, a team that he coached very successfully. One man doesn’t make a team but it can certainly help.  It reminded me of a new song to the tune of “You only sing when you’re winning”, and “You only win when Bobby’s playing” and this proved to be almost true. After a heavy night out, PCC did not turn up with their head in the game and having lost the toss were required to bat first as Bobby opened the bowling. Both Wez and Luke started well with 13 from Bobby and 14 from Hugh, until John Scales took the 3rd over. Wez hoisted John to the Long on the boundary where Bobby gobbled it up and we went for 16. 27 for 1 and 36 for 1 at the end of the 3rd over.  Luke took control of the run chase whilst Jainish backed up until Luke retired on 31 with only 2 balls to go. Simon Wetherell took the last few balls and the score culminated at 58 for 1.

Lanna sent in Neville and Bobby to open against Luke Stokes which was an unusual choice as Luke was very much a part-time leg spin bowler. 17 off the over and a missed chance of a stumping.  Andy bowled well, but streaky 2’s and poor backing up allowed 14 off the over. Wez was hit for 11 off his over and the score reached 42 for 0 after 3 overs.  Simon W bowled the 4th over and couldn’t quite hold a fierce drive from Bobby. 10 off the over and 6 needed from 6 balls.  Jainish bowled the last over and 59 was reached via 4 byes with 3 balls to spare.  Lanna won by 6 wickets.

This was not the start that PCC was looking for and things needed to improve against Alibaba in the afternoon. PCC won the toss and decided to bowl first. This time Wez opened the bowling against Imran and Molin.  A rather poor over from Wez gave away 17 runs to Imran. Jainish’s first ball to Molin was a disgraceful leg-side long-hop which was caught behind by Simon Philbrook and Molin went for a Golden Duck. Dan took the crease and was dropped the first ball. 8 off the over.  Andy took the next over and despite a tidy over of just 6 runs, he dropped a skier off his own bowling and the PCC fielding looked decidedly ropey. 31 for 1 after 3 overs. Simon W bowled a good over for only 8 but Luke got hit for 17 off the last.  Alibaba finished on 57 for 1 with Imran on 29 and Dan on 15 not out.

PCC responded by sending in Wez and Luke to face the leg-spin of Imran.  14 off the first over.  Dan bowled next and induced Wez into a rash slog which was dropped on the long-off boundary by Molin.  Wez did the same again, but to deep mid-wicket where Terry made a good catch and Wez went for 10. Terry bowled the 3rd over and it was Luke’s turn to have some luck when he was dropped by Imran at mid-on. Despite that, Luke was batting well and the score was 41 for 1 after 3 overs. Jainish took the crease and went to town on Molin’s bowling and had some luck – he was dropped by Imran and was given a 6 as the catcher stood on the boundary rope when he caught the ball.  61 was reached by the end of the 4th over and both batsmen were not out on 26 and 19, Jainish’s 19 being from just 5 balls.  A vital win and an even more vital bonus point, but not a particularly good showing.

PCC’s final match of Day 1 was against the Chiang Mai All-Stars who were a cut above the previous opposition and so PCC needed to lift their game in the field and get all of their batting machines to fire on all cylinders in the same match or a place in the finals would be looking iffy.  Wez lost the toss again and was asked to bat. The usual pair opened for PCC against Naveed who went for a respectable 9.   Insha was less fortunate and he got battered for 23 by both batsmen. Ismail stemmed the run flow with 10 from his over, but the score stood at 42 from 3 overs. Wez hit Burhan’s first ball for 6 and retired on 35 not out, whilst Jainish went in and continued the onslaught.  61 for 0 after 4 overs. The final over from Tanveer yielded another 14 runs with Luke not out on 21 and Jainish on 12.  75 for 0 and the highest score of the tournament so far.

The All Stars sent in Naveed and Ismail to open their account. Wez opened the bowling and was very tidy until the last 2 balls went for 10. 15 off the over.  Jainish was next and just 10 off the over.  Naveed was doing most of the run-making and got 2 6’s off Andy which forced him to retire on 32 not out.  46 from 3 overs and the All Stars were slightly ahead but their batting ran out of steam when Simon W took 2 wickets in his over.  The first a brilliant catch by Wez on the run to dismiss Ismail and the next, was also caught by Wez, when Burhan hit to Long-on. 57 for 2 after 4 overs.  Luke bowled a very respectable 10 for the last over and PCC won by 8 runs.  This was a much better result and showed that PCC could bat, bowl and field.  This left PCC in 2nd place in the table and their final pool match would be the last one, thus it would be known what they had to do against Lamphun.