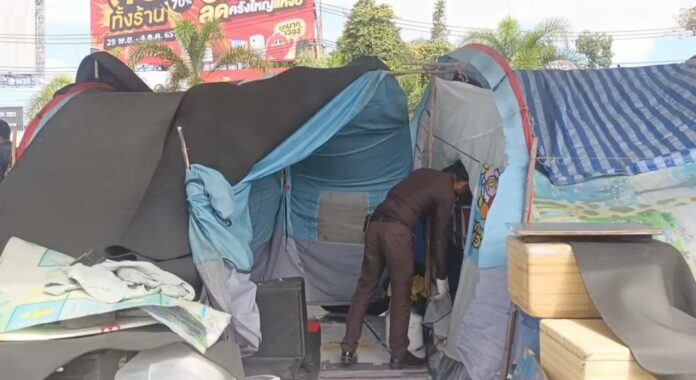 Mr. Wuttisak Rueimkitkan, Pattaya deputy mayor, and officials from the Chonburi homeless center took part in inspecting the unauthorized homeless camp around 10 AM after many residents near Motorway Route 7 complained about the growing number of homeless people taking shelter beneath the road.

After looking around, Wuttisak told The Pattaya News he found 3-4 makeshift tents and one family consisting of a father and his two daughters aged 4 and 14 years old. The homeless family was cramped in one tent, which concerned Wuttisak, so he stated he would try to contact the mother to come and pick up the daughters. As for the other individuals, they would be transferred to the Chonburi Homeless Protection Center, Wuttisak said, adding the city could not do much about them because it might breach Thai Human Rights Laws.

Pattaya’s homeless population has grown by a large margin during the COVID-19 pandemic, when thousands of businesses were shut down, forcing people out of their jobs and suffering from homelessness.

The deputy mayor stated that the city tried to teach these homeless people professional skills so they could make a decent living, but they always chose to go back to living on the street. Now, Pattaya City, law enforcement, and the Social Welfare Bureau are contemplating a new approach to solving homelessness, which, according to the deputy mayor, is largely the result of a larger issue such as poverty.