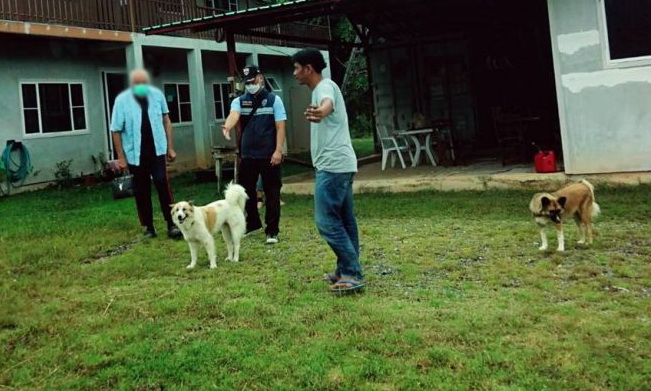 A 63-year-old American man was arrested in the Tai Mueang district for 745 days of overstaying his visa. He did not leave his house for two years.

The Phang Nga Immigration Chief Colonel Phakkapong Boonchana told the Phuket Express yesterday, Sunday (December 4th ), that they have arrested Mr. Michael Scott Drannan, 63, an American national at a house in the Thung Maprao sub-district. Mr. Drannan is now at 745 days of overstaying his legal visa.

Mr. Drannan told officers that he entered Thailand after his retirement. He stayed at a house with an unidentified Thai woman, now his wife, before Covid -19. He grew organic vegetables for sale on 30 Rai plots of land nearby but recently stopped to grow vegetables after economic issues, according to him.

Mr. Drannan told Royal Thai Immigration that he knew his visa had expired so he did not leave the house for more than two years out of fear of being caught. His Thai wife took care of him during this time and sold their vegetables for a small profit. Drannan stated to Colonel Phakkapong that financial issues prohibited him from getting a proper retirement visa.

Mr. Drannan was taken to the Tai Mueang Police Station to face overstaying charges and eventual deportation and blacklisting.

Colonel Phakkapong told the Phuket Express that the arrest followed officers patrolling to crack down on overstaying foreigners as part of a December 1st to December 10th, 2022 campaign.

Meanwhile, a 31-year-old Chinese woman was arrested in Surat Thani for 19 days of overstaying while five others were arrested in Chiang Mai in what Royal Thai Immigration is calling a national crackdown for the start of December.