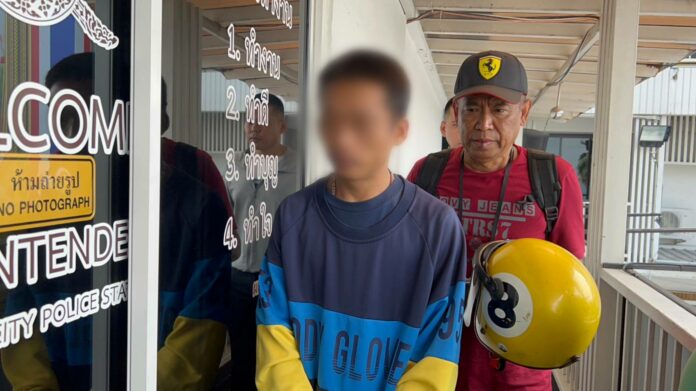 The alleged shooter near Pattaya Walking Street surrendered to police swiftly after injuring two men this morning. However, the suspect claimed the victims were actually “his friends,” and he felt really sorry for shooting them in what he called an accident.

Two men were shot and injured after an argument in Pattaya turned into a violent brawl.

The blatant shooting took place on Second Road in front of a hotel and Indian restaurant, which shocked many tourists who were strolling nearby at 3:46 AM this morning, December 1st. Later this morning, the suspect, 25-year-old Mr. Wirat Kechit, turned himself in at the Pattaya police station on Soi Nine.

Wirat relinquished his .32 mm pistol to police and reportedly confessed that he was the man who fired a gun near Walking Street. But, while sobbing, Wirat alleged to police that both men who were shot were actually his “close friends” whom he followed to face their rivals. The suspect claimed he fired his pistol aimlessly at his opponents after seeing one of his friends being struck in the head with a long knife. “I only tried to scare my enemies by firing at the floor, but I did not look properly because they rushed at me,” said Wirat.

The suspect then admitted he ran away and left his friends behind. Out of guilt for his injured friends, he decided to surrender himself to the police.

Pattaya police would press legal action against the suspect and his rivals who were still on the run. It was not stated whether the victims were aware that they had sustained friendly fire shots.