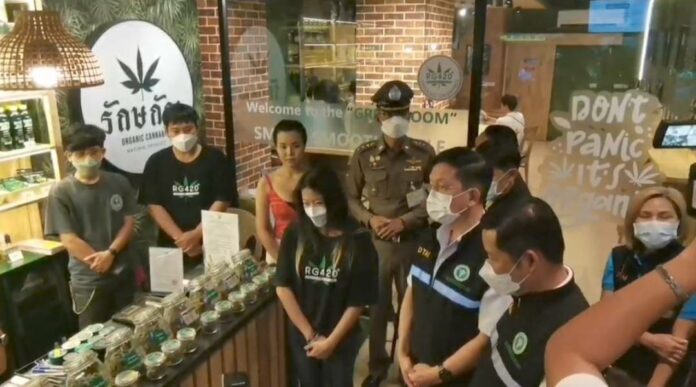 Medical authorities from the Thai Traditional Complementary Medicine Department inspected marijuana shops on Khaosan Road in Bangkok with the assistance of Thai law enforcement to look for unlicensed shops and ensure all shops comply with the current rules and regulations.

The inspection, which took place on the evening of Tuesday, November 29th, was aimed at screening cannabis shops that sprouted up rapidly on Khaosan Road, one of the most popular tourist destinations in Bangkok.

Every inspected shop had a license to sell cannabis, but one had a license registered in Lopburi instead of Bangkok, which was illegal, according to Dr. Thongchai.

Some shops were also discovered to have built a special smoking room for cannabis smoking, which Dr. Thongchai said was a “grey area” as cannabis was only meant for medical purposes. Despite this, the director general admitted that law enforcement could not punish shops with smoking rooms. The current rules prohibit smoking in all businesses but clever business owners have now built separate smoking rooms not part of the shop, which includes the massive Plantopia complex.

Dr. Thongchai also warned shops that having doctors, people with medical licenses or medical staff sitting in a smoking shop for the purpose of allowing recreational smoking and not giving prescriptions or medical support was also “skirting the rules” and not the intention of an exception for letting smoking inside venues with medical staff.

Dr. Thongchai has admitted, however, that banning smoking cannabis entirely is not an option but wants to ensure it is only used for medical reasons.

Yesterday, the Cannabis Association for the People urged lawmakers to legalize cannabis for recreational purposes, stating that banning smoking rooms and smoking cafes will only cause tourists to smoke on streets and at hotels, bothering others.

Dr. Thongchai warned shop owners that if they tried to skirt the rules to sell cannabis for recreation, the rules would be tightened even further. Some suggestions for stricter rules made by Dr. Thongchai that would certainly not be popular were tracking all customers purchasing cannabis so authorities could review their medical prescriptions or requiring a Thai national ID card to purchase cannabis, which would essentially lock out tourists and force sales to foreigners underground as possession is legal and would remain so, according to Thongchai.