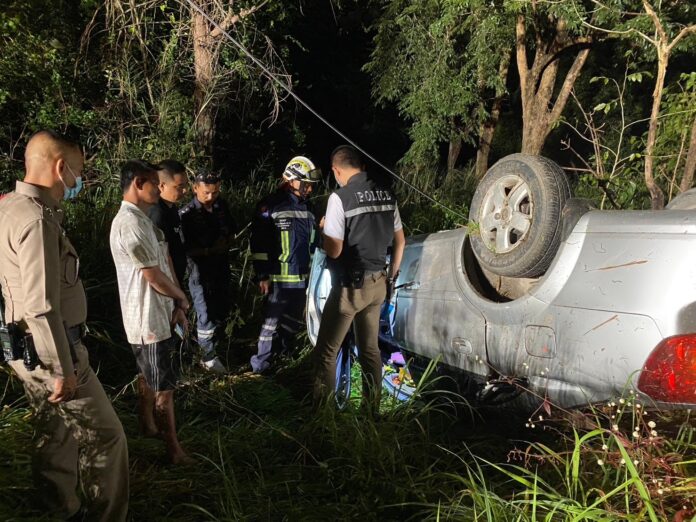 An intoxicated driver claimed he saw a ghost crossing the road in front of him before his car overturned today.

The Huayyai Police was notified of the accident after midnight (November 26th) on the Number 331 Road in Huayai.

Police and the Pattaya News arrived at the scene to find the overturned sedan lying off the main road. Two passengers, Ms. Panaphon Surawit, 16, and Ms. Petcharat Chuepan, 35, were stuck inside the sedan. Rescue workers used a jaw of life to free them and they were taken to a local hospital to treat non-life threatening injuries.

The driver, Mr. Bandit Poesoong, 40, was uninjured and had managed to remove himself from the sedan before law enforcement arrived at the accident scene. He told The Pattaya News he saw a massive shadow cross in front of his sedan. He tried to avoid it but lost control of the sedan before overturning. He admitted, however, that he was drunk.

Mr. Bandit was taken to the Huayyai Police Station for further legal action. Police did not comment if they believed his cause of the accident.