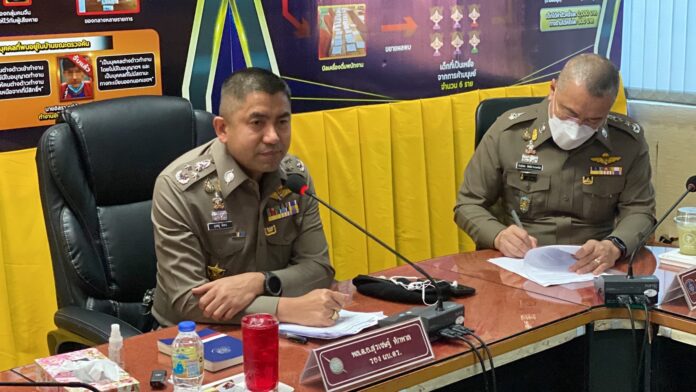 The Chonburi Provincial Police Commissioner has been transferred to an inactive post and charged for allegedly swapping the real suspects with scapegoats in a pool villa shooting case in Pattaya on October 18th, according to assistant national police chief Pol. Maj. Gen. Surachat Hakparn, known by his nickname of Big Joke.

10 suspects including shooters, scapegoats, and accomplices have been nabbed over a shooting at a pool villa in Pattaya on October 18th. The assistant national police chief, or “Big Joke,” said the suspects and the victims may have been involved with a drug cartel as he found illegal substances in the victims’ bodies.

The assistant national police chief who is widely known as “Big Joke” revealed an interrogation result of two scapegoats who were hired to surrender and confess they were the shooters at the Pattaya pool villa on October 18th.

The two scapegoats were sentenced to one year in prison, which was later reduced to six months because they admitted to the allegations, according to Big Joke. The two did not obtain parole.

During the interrogation, the scapegoats also allegedly admitted that a Chonburi high-ranked police officer was involved in swapping them with the real suspects, said Big Joke, and that high-ranking police reportedly turned out to be a Chonburi Provincial Police Commissioner.

Consequently, the commissioner has been demoted to an inactive post and charged for allegedly abusing his power under Section 157.

The suspected commissioner is being summoned to give his statement. According to Big Joke, no evidence of bribery or call for personal benefits has been unearthed.