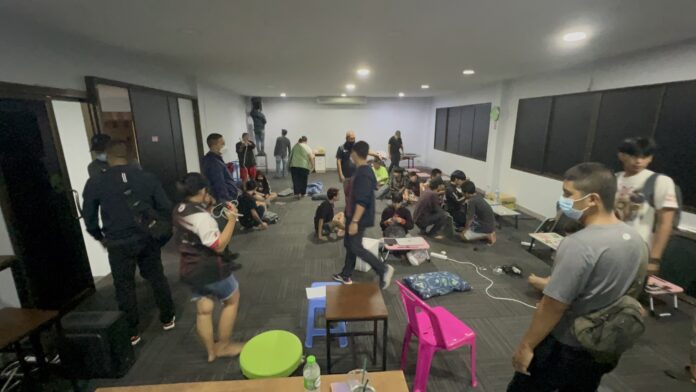 Pattaya police raided an illegal online casino that was disguised as a snooker hall arresting eighteen admins and pledging to find the owner of what is believed to be a larger operation.

The raid followed a tip made by an unidentified undercover customer who told Pattaya police that the venue despite being a snooker hall never seemed to have anyone playing snooker and the tables were covered and unused with many people coming and going to the second floor.

According to Col. Kunlachart, fourteen men and four women were arrested, all who made about 12,000-15,000 baht a month working for a person only known as Mr. Pao who is believed to have recently run a network of illegal online casinos and sports betting websites in Pathum Thani. Mr. Pao was not present and the staff claimed they did not know how to contact him or where he was. Most of those arrested were teenagers and were not identified by police.

Col. Kunlachart stated that his investigation team would attempt to unravel the larger network and revealed to The Pattaya News that operations to intercept illegal gambling operations would be stepped up during the World Cup which starts on November 20th.

Thailand has some of the strictest anti-gambling laws in the world, notes The Pattaya News.