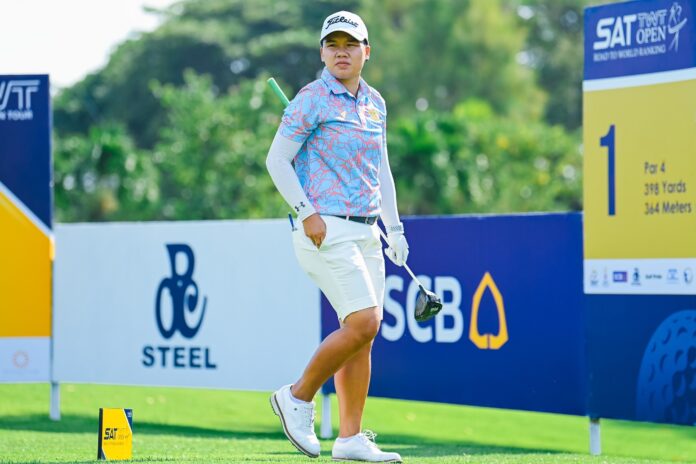 The 27-year-old from Prachinburi highlighted her round with an eagle on the par 5 hole No 3, four birdies against a lone bogey on the 12th to launch her campaign in the ninth TWT-Open with a 67 at the par 72 6,542-yard landscape.

“The course sets up pretty challenging this week. The green is quite tough and the winds are quite strong,” said Kusuma whose best attempt on the TWT was at tied second in the 6th circuit at Panorama Golf and Country Club in Nakhon Ratchasim in August.

“I’m quite happy with the way I played on the third hole. I hit 156 yards from the pin, and although I didn’t hit the green in my next shot, I chipped in for an eagle,” added Kusuma who has yet to celebrate a crown since winning at the Thai LPGA event in 2019.

“I don’t have high expectations this week, to be honest. I’ve never played on this course and it’s pretty tricky, especially on the green. I have to be cautious,” said Kusuma, a one-time winner of the China LPGA event in Wuhan back in 2013.

Twenty-three-year-old Jaravee, who won the season-ending EPSON Tour Championship in Florida last month, bounced back from a slow start to shoot six birdies, five after the turn, against two bogeys for a 68.

“I didn’t hit the greens much, but I managed to come up with some good hit up and down shots and made several birdies at the back nine,” said Jaravee who is using this tournament to shape up her game before the LPGA Qualifying event in the US.

“The course is quite long with a lot of winds. There are a lot of slopes on the greens which are quite tricky. My plan is to give myself as many opportunities as I can and go for birdies,” said the promising Thai, adding that her experience with the EPSON Tour has benefited her game.

“I’ve learned to be patient around the course. Even I started with a bogey, I tried to calm down and fought my way back,” said Jaravee. Her round of 68 was also achieved by Mind who had six birdies and two bogeys.

Patcharajutar Kongkraphan who has dictated five domestic titles this season opened with a 70, three shots behind the lead.

The ninth SAT-TWT Open is organized by Thailand Women’s Professional Golf Association (Thai WPGA). It will be completed in a three-day stroke-play format. After 36 holes, the top 60 and ties will move ahead to the final round where they will battle it out for the winner’s prize money of Bt367,500.

The SAT-TWT Open Road to World Ranking is sponsored by the Sports Authority of Thailand, National Sports Development Fund, Siam Commercial Bank, P Overseas Steal (Public Company Limited), T.D.C. Steel Group Co.,Ltd., and Pattaya Country Club. Fans can catch up with news updates on ThaiWPGA Facebook Fanpage or at www.thaiwpga.com. Live coverage can be followed on the ThaiWPGA Facebook Fanpage on Thursday 10, November from 8 am onwards.

The Thai Women’s Professional Golf Association was established with the objective to support and promote Thai women’s golf activities. The association aims at organizing a local tour with world-ranking points in the near future which will pave the way for Thai golfers to the international arena. In addition, Thai women’s golfers can use the tour to develop their skills to meet the universal standard. Moreover, medium-proficiency level players can gain experience from Challenger tours which can help produce new generation players and simultaneously develop golf human resources and systematic golf organization locally.