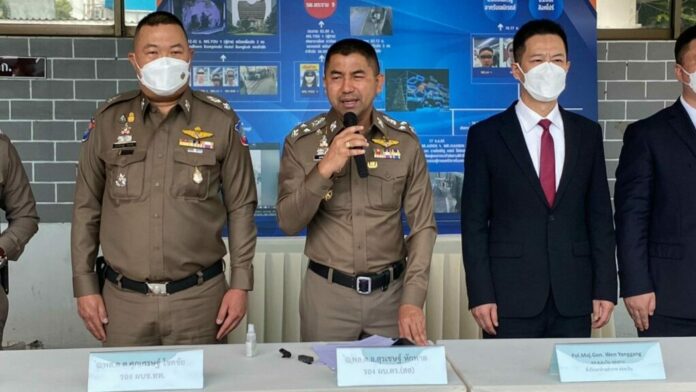 Deputy National Police Chief Surachate “Big Joke” Hakparn on Wednesday, October 26th, reported to representatives of the Chinese Embassy in Thailand regarding the investigation of the case of a 32-year-old Chinese woman who was found dead with an unidentified cause of death after going out to an entertainment venue in Bangkok’s Huai Kwang district on September 17th.

The police investigation, which was conducted following the request of the Chinese Embassy, revealed that the Chinese tourist traveled to Thailand on September 15th with three female friends. On the night of September 16th, all of them went to a nightclub on Ratchadaphisek Road and invited three male friends. Around 1:00 AM. on September 17th, the deceased reportedly vomited and fainted. Security guards at the venue then took her to Rama IX Hospital. She was pronounced dead afterward. Later, another group of three Chinese men and a Thai driver went to the deceased’s room and took all of her clothes and personal belongings to burn at the venue.

According to the primary autopsy, the cause of death was drug poisoning as Amphetamine was detected in the body of the deceased. Three male Chinese friends were summoned for questioning and drug tests. All three also denied drug abuse. No drug substance was found in their bodies. However, authorities had already revoked their permission to stay in the Kingdom.

Three Chinese men and a Thai driver who broke into the deceased’s room were also summoned for further interrogation and were initially charged for burglary at night and damaging, destroying, concealing, and/or taking away the evidence in the offense. “The investigation and legal actions were taken to clarify what actually happened as well as to prosecute all related suspects. This hopes to improve the image of Thai tourism and make tourists who plan to travel to Thailand feel safe and have more confidence when traveling in the country,” Surachate added.