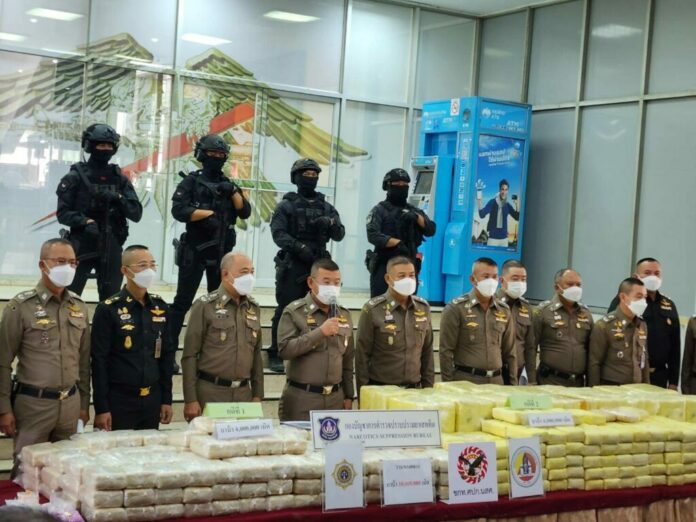 The Narcotics Suppression Bureau of the Royal Thai Police on Monday, October 24th, announced the confiscation of more than 10 million methamphetamine pills being smuggled from the border.

In the first case, three suspects, including two men and a woman, were caught on October 19th at a gas station in Maha Sarakam province, along with 10 sacks of methamphetamine, containing a total of 4,000,000 meth pills, two firearms, and their sedan car and a van were also taken. The arrest followed an expanding investigation of previous drug arrests in the Nong Khai province. In the second arrest, two alleged drug smugglers were caught with 16 sacks of methamphetamine, containing a total of 6,000,000 meth pills, while they were transporting the drugs from Nakhon Panom, heading to Ayutthaya.

The police chief also revealed that both gangs had smuggled drugs from the borders of neighboring countries before delivering to customers in the inner areas of Thailand. The confiscated drugs and properties in dispute were transferred to the Narcotics Control Board for further investigation while the suspects were detained for interrogation and legal proceedings.