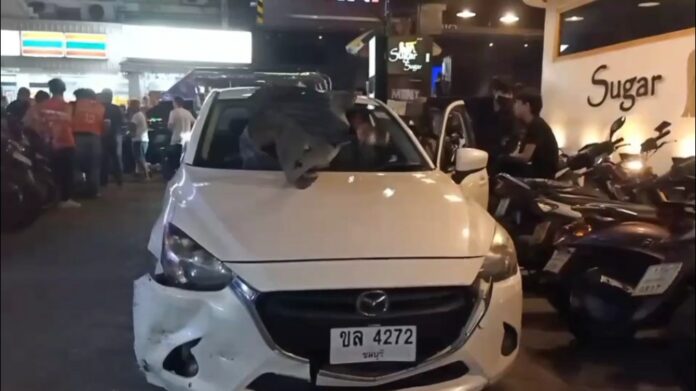 A German man reportedly collided his sedan with three motorcycles and a stationary vehicle in Pattaya.

Pattaya police traveled to the accident scene on Soi Buakhao to check on a German driver who reportedly crashed his white Mazda sedan into another sedan last night, October 5th.

The officers, however, were unable to identify the man or get him to explain his side of the incident because he appeared to be either intoxicated or unstable, according to police reports. He was uninjured by the accident.

Pattaya police then asked another party and witness, Mr. Panupong Kasempochsiriku, 50, what had happened. Panupong stated that he saw the German driver suddenly crash into three motorcycles before hitting the side of Panupong’s sedan that he parked on the road.

The German driver, who wasn’t identified by Pattaya police, was taken to the Pattaya police station for an alcohol test. The police did not provide details on what legal charges would be pursued against the driver.