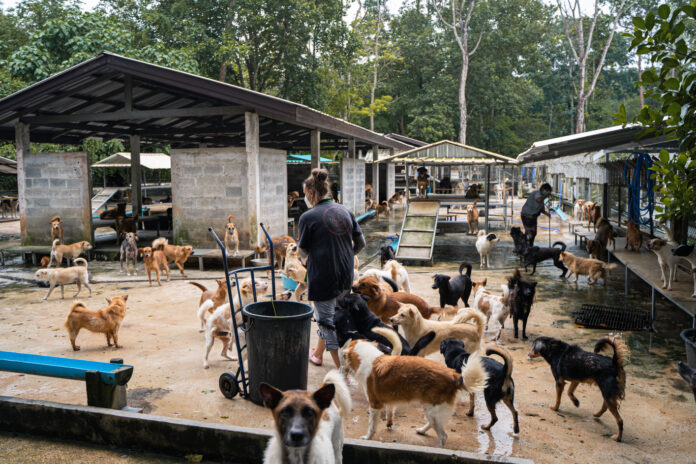 A team of Soi Dog veterinarians, community outreach staff, and rescue officers, alongside a representative from the Phuket Provincial Office of the Department of Livestock Development, came together to ensure all 735 resident dogs at the government-operated facility received vital vaccinations against six diseases, including rabies, distemper, and parvovirus.

“Annual vaccinations of shelter dogs are a must and should be standard at every dog shelter,” said Dr. Alicja Izydorczyk, Soi Dog’s International Director of Animal Welfare. “Distemper and parvovirus are extremely contagious, and both are very common in Thailand, killing hundreds of thousands of dogs every year. If dogs in a shelter are not vaccinated regularly, there is a very high chance of an outbreak which can easily kill half of the shelter dog population.”

Soi Dog has been providing veterinary care for the dogs at the Phuket Stray Dog Shelter for over 15 years. In addition to the annual vaccination drive, the foundation sends veterinarians to the shelter on a weekly basis and community outreach staff on a daily basis to ensure that all dogs housed there are spayed/neutered, dewormed, protected against ticks and fleas, and treated for any health issues, with the most common being dog bite wounds, fungal and other skin diseases, diarrhea and coughing. Any dogs suffering from more severe conditions are transferred to the Soi Dog hospital in Mai Khao for further treatment.

All of this comes at a cost, and the non-profit organization allocates approximately 2 million baht every year to veterinary treatments and prophylaxis for the dogs at the shelter. Receiving no government funding, these costs are covered by kind donations from generous animal lovers worldwide.

Caring for dogs at the Phuket Stray Dog Shelter is a major part of Soi Dog’s community outreach programme, which provides care and treatment for street dogs and cats within communities around Phuket.

Soi Dog’s three community outreach teams each consist of a veterinarian and veterinary support staff who travel around the island to provide prompt medical treatment to animals who have been reported sick or injured. Among its many benefits, the programme helps ease the burden on Soi Dog’s ever-busy dog and cat hospitals. It also helps teach basic animal first aid to those who care for dogs and cats in the community through incidental learning and designated workshops.

“While Soi Dog cares for animals from all backgrounds, whether they’re living out on the streets or in facilities like the government dog pound, it is also the collective responsibility of the community to come together to help the animals of Phuket and beyond,” added Dr. Alicja.