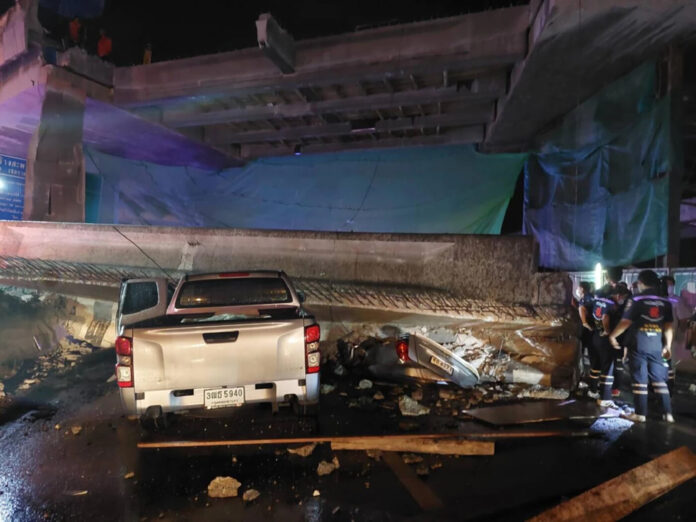 The Department of Highways is accelerating the investigation and providing remedies for families of the injured and deceased in a bridge girder collapse on Rama 2 Road in Mueang district of Samut Sakhon province yesterday evening, July 31st.

Sarawut Songsivilai, Director-General of the Department of Highways, revealed that at the time of the fatal accident, supervisors and construction workers were preparing the area to pour cement for making the new bridge floor after smashing the damaged one. Suddenly, a hanging girder at the end of the bridge collapsed and crashed on three passing cars on Rama 2 Road.

Highway officials ordered the closure of the main inbound traffic lane for examination and the temporary halt of the U-turn bridge construction immediately after the incident.  Experts would be deployed to inspect construction parts, materials, machines, and equipment as well as the readiness of the staff. If any part were found to be unsafe, the construction would be ordered to stop immediately. A prime witness who was a female passenger of a passing pickup truck revealed that she and her family were driving home from Samut Songkhram province when a piece of dry cement fell onto a sedan in front of her and a front part of her truck. Fortunately, all people in the car were safe but they were frightened by what happened.

The Highway authorities had expressed their deepest condolences to the families of the deceased and those who were injured in this incident and vowed to proceed with and conclude the investigation within 14 days strictly.